Yesterday was the Trillwings' fourth anniversary. It's funny--it seems so long ago and yet so recently that we said our vows on the deck in my parents' backyard. The "so recently" stems from how much fun Mr. Trillwing makes our time together. He's lovely. The "seems so long ago" undoubtedly comes from the ten months of sleeplessness we've endured, courtesy of the little man.

(BTW, I forgot to mention that Mr. Trillwing posted the June photos of Lucas. Here's one of my favorites.) 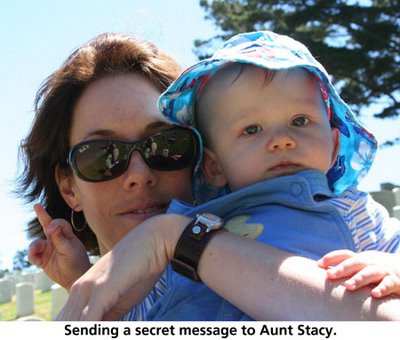 Mr. Trillwing and I ventured out into the insane heat of Sacramento for a nice dinner in Old Sac, followed by a concert by Kris Kristofferson at the old art theater downtown. The theater was not well air-conditioned, but otherwise the concert was perfect. We had seats in the sixth row, so we could see the mild chagrin on Kristofferson's face as he half-fumbled his way through the guitar playing. He was darling, this seventy-year-old man who declared, upon giving up on a bit of harmonica playing: "I was going to play 'Taps,' but I put the damn thing in backwards." After intermission, he also played about 12 bars of a song before plugging in the guitar.

I know, it sounds awful, but it was sublime. It's rare a performer is so disarming and so human. And he's such a powerful songwriter. (In case you think you're unfamiliar with his work, he penned the Janis Joplin hit, "Me and Bobby McGee.")

Anyway, it was a fabulous evening, and I spent it in the best possible company.
Posted by Leslie M-B at 9:29 PM