Random bullets of the Trillwing household 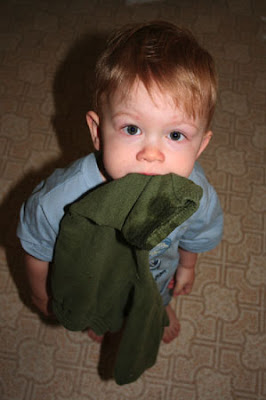 • Lucas is tall. How tall? Taller than many three-year-olds tall. At 21 months. And he's going through shoes as if they're tissues. I keep forgetting to mention his updated galleries.

• Lucas is getting a (wee) bit more articulate. Recently added to his repertoire: the dog's name. Only he says "Woody" without the D. (Try it aloud yourself. Damn cute, no?) He has also mastered the use of "please," albeit in toddlerese: Pweeeeze!

• The Liability's latest checkup required three trips to the vet on the same day. He's too, um, vocal to be left at the vet's office, so Mr. Trillwing had to drag him across town three times for blood tests. The results? Things are status quo, and our wallet is $350 slimmer. He's 14 years old and in relatively good health, but I'm not seeing a whole lot more extensive bloodwork in future years, if you get my drift...

• I'm gardening. It's going better than I expected, thanks to help from knowledgeable family and friends. But the tomatoes that I thought I had planted in the sunniest spot in the yard? They're getting only about 6-7 hours of sun each day, and they need 10-11, I think. Damn.

• We have a scrub jay nesting in our butterfly bush. Cute! (Photos forthcoming if I don't feel quite so lazy as I do at this moment)

• Lucas is big time into drawing with crayon, pen, marker, pencil, brush--whatever he can get his hands on. His ball-point pen drawings bear an uncanny resemblance to some Chagall sketches I've seen. I think if I encouraged him to draw with pen over his watercolor creations, we'd have some success on Etsy. It's kind of freakish. I'll try to get Mr. T to scan some of the drawings. 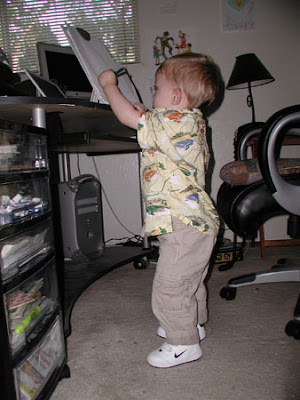 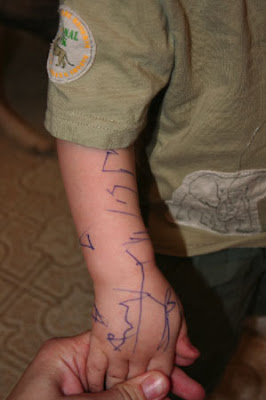 • I haven't been as intellectually or artistically productive as I'd like, but the house, at this moment, is pretty damn clean. Now if only my desk would organize itself.

• And last but certainly not least, Mr. Trillwing sent me this e-mail and image with the subject line "I look good in yellow":

The other day I nicked myself a good one while shaving and the fucking thing wouldn’t stop bleeding and I had work to do, so I grabbed a paper towel and a roll of masking tape and came up with the solution pictured below. It occurred to me right then that this might be considered eccentric behavior, but it got the job done when nothing else was working. As for the photo, I think I like it because it doesn’t make me look fat: 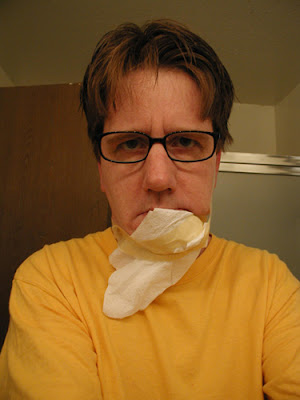 Best of all? He dragged the trash and recycling to the curb while thus attird.
Posted by Leslie M-B at 3:49 PM

What an adorable little man!!!

No, your tomatoes are not in trouble. They may be smaller or not grow as fast, that's all. Try some Miracle Grow to give it extra nutrition. Also, turn the soil around the base of the plant.

That picture of Mr.T almost made me spew tea outta my nose! He's a keeper for sure. Tall Toddler Trill is still cute as a button.

The tomatoes will be fine, but skip the environmentally evil Miracle Grow and go for some manure instead!

that is the most hilarious makeshift bandage i have ever seen.