I've written before about John Lind, my great-uncle. John passed away yesterday morning, about six weeks' shy of his 97th birthday. Two of his children, Ian and Bonnie, shared the news on their blogs yesterday; Bonnie followed up with another post this morning. 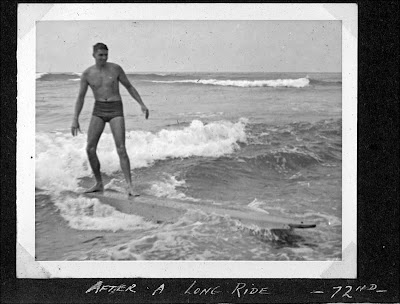 John Lind surfing in the First National Surfing Championship, which he helped organize, in Long Beach, California, 1938. Photo stolen from iLind.net.
It's been both fascinating and heart-breaking to read Bonnie's and Ian's blogs over the past few years as John entered his final decline, but I hope Bonnie and Ian know how much those of us who knew John--as well as those who didn't--appreciated their chronicle. The grappling in the open with senility, long-term care, and the decision of when to turn to hospice care, as well as Ian's careful curating and digitizing of John's photographs and other ephemera, have provided us all with a glimpse into the difficulties of end-of-life care, provided support to others going through the same drama with their loved ones, and made us all think about end-of-life issues more deeply and thoughtfully.

I hope Bonnie, the family historian and genealogist, and Ian, a recovering journalist and expert chronicler of the last years of his father's life, find the time and space and strength to publish a volume on the long life, and long leave-taking, of John Lind.

If you have any interest at all in surfing history, you should go read Ian's blog, as in addition to writing about John's experiences in long-term care, he's done a fine job of chronicling John's participation in surf culture in Hawaii. From Ian's blog yesterday:

[John Lind] made quite a mark in the world of Hawaii ocean sports after arriving in the islands in 1939. He was a founder of the Hawaii Surfing Association, a founder and first president of the Waikiki Surf Club, and a founder of the Makaka Surfing Championships. He headed the Waikiki Surf Club through most of its first decade. He believed in amateur sports, and I don’t think he ever warmed to the idea of surfing becoming a professional enterprise.

I wish much peace to the Lind family, this week and always. If you're so inclined, please hold them in the light.

UPDATE: The Star-Advertiser has a nice obit, and the Grunion Gazette (where Fang and I met when we were both working there) has a more Long Beach-centric obit.
Posted by Leslie M-B at 11:11 AM