On dreams: dinos in the suburbs

I've never been big on dream interpretation. I don't believe that a horse in a dream always stands in for, say, jealousy, or that wallboard means I must be feeling depressed. I mean, what if my memories of wallboard are all happy ones?

I do not, however, know where the dinosaurs come from. 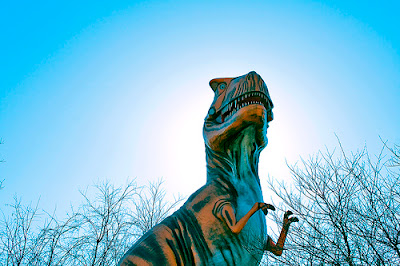 For years--since my childhood, long before the cinematic dinosaurs of Jurassic Park--I've had dreams about dinosaurs appearing in whatever neighborhood I happen to be living in at the time. And last night was one of the most intense, and longest, dinosaur dreams I've ever had. This time, instead of there being some rogue dinosaurs on the loose in the suburbs, the whole infrastructure of the city was set up to accommodate dinosaurs and to separate them as much as possible from humans--as if someone cloned some dinosaurs, and even once they started wreaking havoc on the city, environmentalists said, "Hey, it's their planet too, now. . . Leave them be."

So there were special tunnels for dinosaurs to travel in, and special roads where humans could take their cars only if they were being pursued by a rogue dinosaur--you know, empty roads where you would always be assured swift travel. And in this particular dream, there was a really bad tyrannosaur problem--nobody could control them, and it was illegal (or maybe impossible) to harm or kill them, apparently. When a T. rex came to the burbs, everyone yelled "Tyrannosaur!" and got the hell out of Dodge.

Fortunately, since I finished my dissertation, in my dreams I've been able to run very fast and even fly. (Pre-completion, running felt like being trapped in a tar pit.) So in part of this dream, as I was being pursued by a T. rex, I ducked into a pterodactyl expressway (kind of like a long bat cave) and flew with them as I tried to protect Lucas from their sharp teeth.

And whenever I visited someone's house, everyone had assigned places to hide when the particularly carnivorous dinosaurs passed by. Lucas and I were to hide in a particular closet at my grandmother's, for example, and I was supposed to give him a sippy cup of milk to keep him quiet.

Anyway, the dream and all its details have been with me all day. It seemed so real.

Do you have a recurring dream? What about?

I'm just excited that finishing the diss allowed you to fly!! I hardly ever remember my dreams. :(

I had a reoccuring dream as a kid that I would be flying on my magic carpet. I would wake up in the morning sitting crosslegged on the little carpet by my bed.

Before we met it never occurred to me that dinosaurs could be the least bit scary. And this I discovered after we had you stay in the "dinosaur room" when you visited. And as I look around my office at the couple dozen small dinos I still don't see how they could possibly become grist for anxiety. :-)

Unlike the terrorists and (more recently) dictators who make cameos in my dreams whenever I need a symbol for obligations or odious tasks. Two nights ago I scuffled with Saddam circa 2003 and he ended up tumbling over the edge of a bridge; and I just knew that since he was dead the war would be over soon.

I basically consider dreams to be inkblots devoid of meaning until we apply our waking minds to them. But I still can't figure out what's up with the inclined planes: stairwells, parking garages, escalators, even fish ladders!