For all those Sesame Street fans

A big thank-you to Phantom Scribbler for this link: Cookie Monster's neurotic monologue.

My afternoon was consumed by. . .

. . .this Blogging of Substance (BS?) at MuseumBlogging.com.

So yes, I have another blog now. Those of you interested in museum stuff, please stop by every once in awhile.

And yes, I'll still be puttering around The Clutter Museum. No worries!
Posted by Leslie M-B at 7:25 PM No comments:

Mr. Trillwing, who has spent the last several weeks watching a few seasons of Star Trek: TNG while he works, will find the results (esp. the top three) of this Star Trek personality quiz especially funny. I'm horrified as a result.

(BTW, I love that "Redshirt" is a possible answer.)

Your results:
You are Beverly Crusher

Lucas has begun pulling books from shelves. His first selection?

A photographic edition of Jacob Riis's How the Other Half Lives. In the state our apartment is in right now, I'm suspicious that it's not some kind of commentary on his environment.

Random Thoughts that I'm Sure a Therapist Could Make Something Out of, but Right Now We'd Rather Spend Our Money on Babysitters

1. Conversation between me and Mr. Trillwing:

Mr. T: What would you think about going to see Kris Kristofferson at The Crest Theatre as a late birthday present?

Me: Sounds great. When?

Me: You mean, on our anniversary?

Mr. T: (wincing) OK, I would have figured that out eventually.


2. Why is Lucas drawn to the dirtiest corners of the apartment? He especially enjoys filthy linoleum. I'm hoping all the mouthfuls of dog hair boost his tolerance for dander.

3. Remember the fungus among us in my old apartment? Well, yesterday I found a major leak under our kitchen sink that has contributed to a really impressive mold colony. The best part is that as the wood under the cupboard dries (not sure why the handyman didn't replace it), all the cleaning chemicals are sitting out on the kitchen floor. Good thing we have our White Trash Baby Gate (TM) protecting Lucas from harm: 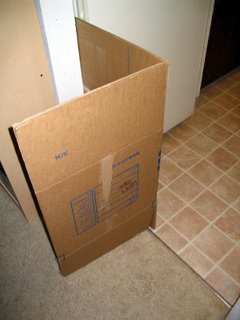 (If you think that keeps him out of the kitchen, you've never lived with an 8-month-old.)

And then as I was working in my home office last night, I heard something hitting the miniblinds. I prayed it was a ridiculously large insect, but since it was raining, of course it was water pouring down the inside of the window pane. Mind you, there's a balcony overhanging this window. A big balcony. So the water wasn't coming from outside the wall--it was dripping down inside the wall. *grumble*

4. Bad news and good news: Since I'm graduating, I have to go on Mr. Trillwing's Very Good but Quite Expensive Health Insurance. Open enrollment is this month, four months before my student health insurance expires. Damn. But: Fabulous Doctor (Lucas and Pete's doctor) has agreed take me on as a patient, even though she's technically not accepting new patients, because my blog makes her laugh. Score another one for the blog! (And thank you, Dr. Fabulous.)

5. Sometimes I think Lucas is a secret agent. His mission, should he choose to accept it--and oh, he has!--is to make it all the way down the kitchen floor to the dog's water dish, grab it, and spill it. So far, the evil almost-Dr. Mommy has foiled his every attempt. But one day she'll let him spill the bowl of water all over himself. Oh yes, she will.

6. He has toys. Lots of toys. But what does he most want to play with? 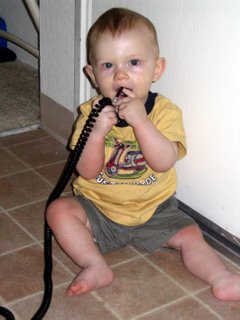 There's just nothing better than chewing on a strangulation hazard while sitting bare-legged on dirty linoleum. Nothing!

7. As Lucas becomes increasingly mobile, Woody the Leaky Old Liability has increasingly taken refuge on the couch. Of course, he's chosen my side of the couch, so I'm always settling into some wet spot or tufts of dog hair. (Hence the couch cover: it's very washable.) 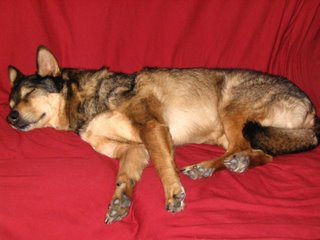 8. If this were Phantom Scribbler's home, where the darling, articulate kids have themed weeks or months (trains, outer space, etc.), this week's theme at the Trillwing Manse would be Curdled Blood. It's all wailing all the time these days because--cue trumpet flourish--Lucas is cutting a new tooth.

10. I haven't mentioned my dissertation much lately because I haven't been working on it as much as I should be. Bad trillwing, bad! But I have a meeting with Fantastic Adviser on Thursday, so you can bet that something will be accomplished by then. And because I have grading to do this week, dissertation progress will definitely be made.
Posted by Leslie M-B at 8:04 PM 5 comments:

Website: Coudal Partners. Always some weirdness going on there.

Toy that you pretend is for your kid but really is for you: 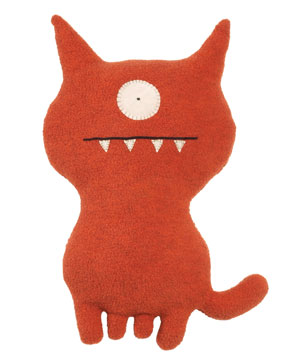 (Ours is more fuschia than red. You can find this one and others at Uglydolls.)
Posted by Leslie M-B at 11:10 PM 1 comment:

Hoo boy, have I ever been saving up the map links.

Via Found History, which calls the post "amateur historical archaeology": scar tissue of San Francisco railroad tracks at Michal Migurski's tecznotes. *sigh* As if I needed yet another RSS feed to read at Bloglines…

FedEx plane arrivals during a thunderstorm near Memphis. Be sure your computer's sound is on.

From Google Maps, where I grew up: 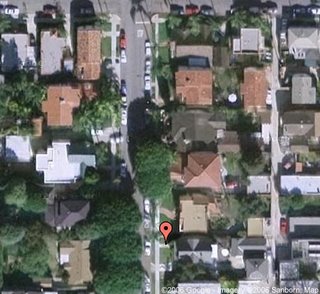 Looks nice, eh? My house was the one with the curvy front walk. I'll never, ever be able to afford to live there. Mom and Dad bought the house for $28,000 and houses in the area are now selling for well over $1 million…

How 'bout you? What does your childhood street look like on satellite surveillance? Maybe we have a new meme here?
Posted by Leslie M-B at 5:46 PM 2 comments:

I'm just sayin' you might want to check it out if you're starved for trillwing-generated content.
Posted by Leslie M-B at 1:59 AM 4 comments:

Filed under "things that are very, very wrong"

Our two-night stay at an upscale resort in Tucson cost only $12 more than the dog's 3-night stay at the Wag Hotel in West Sacramento.

But we do love the old guy: 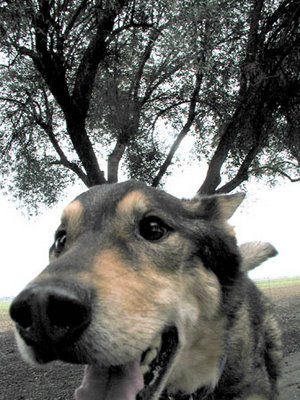 Check out Fang Bastardson's lovely post about his wife. Fang, The Missus, and the Man-Cub are lucky to have one another, even if they did spend Mother's Day in Escroto del Diablo.

If you're not a regular reader of Fang's blog, you're missing out. Funny guy, and seems pretty bright under that gruff exterior.

Things you don't want to hear over e-mail

#1: That Tough Reader will be out of town the second half of May, and thus won't be able to provide comments on any revisions of the diss.

#2: That Fantastic Adviser agrees with Tough Reader that taking the summer to revise the dissertation will make it a better book.

This means I won't actually graduate on June 15 as I had anticipated.

Of course, I agree with their assessment: more revision time will, indeed, make for a better dissertation. But ack! I could taste the completion.

So: I will walk at commencement in June. I will turn in the diss over the summer. The official degree conferral date will be September 15.


In other news, I won a university-wide graduate student teaching award. I think it's one of those things where just about everyone whose department nominates them gets an award (there are 10-15 recipients), but it's still nice to be nominated.

Speaking of teaching awards, did I mention one of my favorite professors won the university's $30,000 undergraduate teaching award? Yes, you read that figure correctly. Unlike my little award, which I learned about via e-mail, news of this one gets delivered by the Chancellor walking into the classroom. With cake! Wish I had been there to see that. It's well-deserved.
Posted by Leslie M-B at 6:11 PM 4 comments:

OK, it's once again time for Blogging for Books over at Faster Than Kudzu. Since I was the winner of the last go-round, I get to make the first culling of the entries. Fun!

This month's theme is "cheating." How cool is that? Even cooler: if you win, you win a book. Free book, people--free book!

So start writing, and then leave your link in the comments of this month's Blogging for Books thread. Entries are due early Monday morning.

So I gave The Egg Talk today at a food studies conference on campus. The conference was better attended and far more interesting than I expected it to be, and the egg craziness was received extremely well. Lots of laughs during the talk, which is always nice, but then lots of good comments and thought-provoking questions afterward, too. Fantastic Adviser asked me if post-diss I was going to write the scrapbooking book or the egg book first.

"Egg book? There will be no 'egg book,'" I said emphatically. "Maybe I'll write an article for Bitch or something like that, but no book."

"Oh come on, you have to write up the egg thing," she said. "Didn't you notice? It was all eggs, all the time today."


So. . . Let me see how my CV's publications section will look, say, five years down the road, if all goes well:

- Article arguing that "American chicken eggs, as controlled and packaged in the supermarket, are at once a site of reassurance and anxiety for Americans concerned about declining fertility" published in some food studies journal of which I have not yet heard.

- Book under contract on cultish women crafters and collectors, including chapters on model horse collectors and scrapbook enthusiasts.

Intellectual schizophrenia, anyone? Would someone in an American Studies department please, please hire me? 'Cause I just don't fit anywhere else. And I'm really kind of enjoying the wackiness.


Tomorrow's talk, when I visit an American Studies class on nature and culture: (1) early 20th-century American women museum scientists' involvement with amateur science clubs AND (2) Jane Goodall, Dian Fossey, and transnational scientific discourse. Not sure how I'm going to bring those two together, but that's what the professor requested I speak about: women scientists and outreach, then women primatologists and colonialism.

Friday's talk, in Monterey (Yay for Monterey! Boo for a nasty Friday morning drive there!): "Democratizing American Science? Women Scientists' Outreach to Amateur Clubs, 1880-1930." The abstract, if you care:

In the Gilded Age and Progressive Era, women’s clubs expanded beyond their common concerns with literature and social service to embrace scientific learning. This paper considers the participation of professional women scientists—all of them affiliated with museums—in a selection of these clubs and associations. In contrast to their museums’ established channels of learning—exhibits and collections—the women’s styles of participation in this arena tended to embody a“bottom-up,” grassroots approach that drew on Progressive educational reforms. The paper argues that these scientists’ affiliation with these clubs proved more significant to the dissemination of scientific knowledge to amateurs than did their respected careers within some of the nation’s top natural history museums.

Chapter 4 is fully drafted and I'm thinking it's pretty strong.

On to the dissertation conclusion--finally. Woohoo!

And now for something completely different and damn cute.
Posted by Leslie M-B at 1:23 AM 4 comments: