Lucas has been drawing a lot of people lately--our dining room table is drowning in sketches--and tonight he drew this one for me: 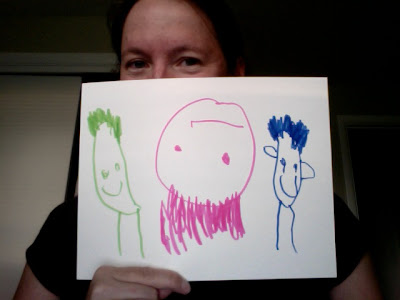 Then blue dude came along. According to Lucas, blue dude thinks he's happy, but he's really sad. Hence the tears coming from his eyes.

I don't know what the story is with green dude. Maybe he's feeling some schadenfreude for blue dude?

(Fang also received a drawing from Lucas; his features an "invisible guy" drawn in yellow. Fang acknowledges my new acquisition is superior. That's why I'm looking so smug in the photo.)

I will now take a moment to remind Fang that Lucas has never drawn a portrait of me, but Fang has merited several, including this recent one, which is a damn good likeness: 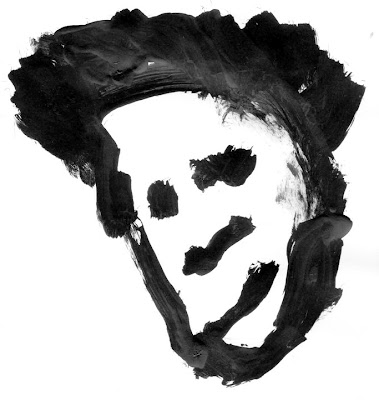 Of course, there's also the famous "neckchin" drawing, and this next portrait, done at age 2 years and 4 months, is definitely among his greatest hits, and an amazing likeness of Fang: 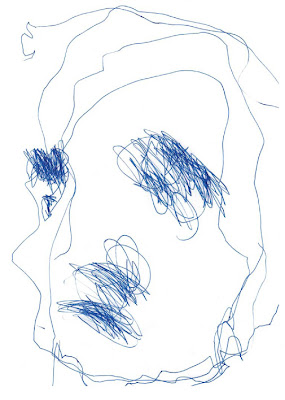 I'm worried this means the boy is going to suck at left-brain thinking. (Who am I kidding? I know it means exactly that--he's cursed by genetics.) Time to save up for math tutors!
Posted by Leslie M-B at 8:03 PM 3 comments:

Welcome to Idaho. It's like Iowa, only with more consonants.

You've got to respect any region whose local broadcaster offers this list of potential weather challenges: 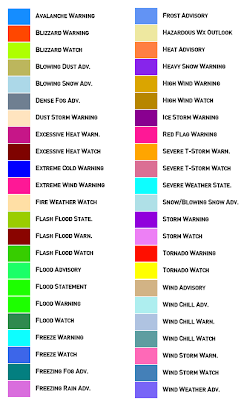 Labels: What passes for science around here, Whining Exhortation and Angst

Another thing I love

Posting has been light, and may continue to be--this first week of class has been fun, but it's kicking my butt, too.

A morning with the boy

Wednesday is Fang's craziest workday, so it's considerably easier for him if Lucas and I leave the house for part of the day. As I spent most of yesterday finalizing a big syllabus for a new course, I was happy to go adventuring with the boy today.

We took a little walk around a Boise park that features a hill. After a decade in Davis, being able to see an entire city from the top of a hill seemed downright miraculous. I took a ton of photos, but my iPhone camera skills are not strong when it comes to landscapes. This will teach me to carry a real camera. . .

Lucas, as usual, was happy to serve as a photo subject: 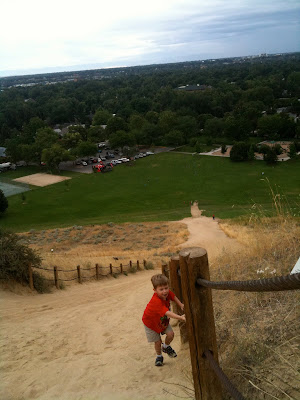 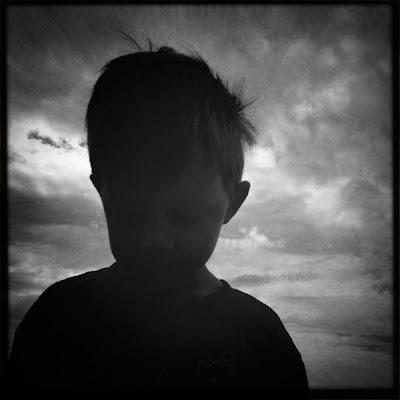 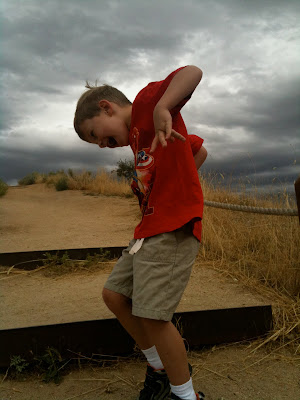 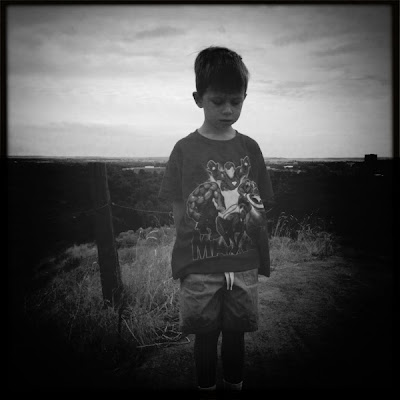 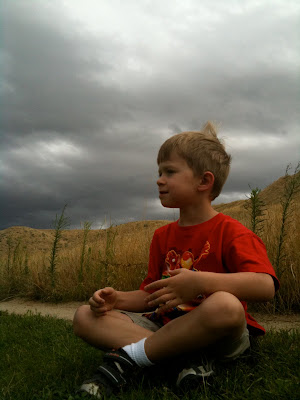 Soon I need to submit a document to my mentoring committee explaining (a) what I plan to accomplish this year and (b) what I'll accomplish for tenure. It's not a document that's set in stone, but it needs to be thoughtful and ambitious without being suicidal. Would any of my tenured or tenure-track readers be willing to share similar documents they have submitted early in their careers? I'd find it tremendously helpful. You can e-mail me at trillwing -at- gmail -dot- com.

Alternatively, if you happen to know where I might find such documents online, please leave a link in the comments below. I'm having a heck of a time locating samples.

A couple posts ago I marveled at the number of frozen potato items available in a local grocery store. After all, this is Idaho, and you'd think fresh potatoes would be on everyone's plate. Running across these freezers makes me suspect otherwise: 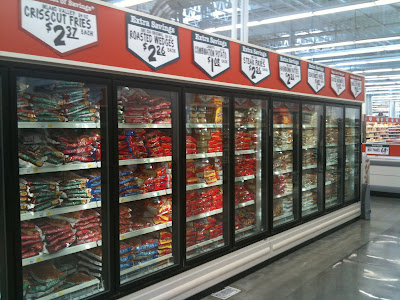 Stephen Colbert on the recent ruling re: Prop 8

One thing that has absolutely astonished me throughout our move from California to Idaho has been Lucas's resilience. He's announced on more than one occasion he wants "to live here forever" and "never move again."

Part of this comes from a new friendship he's struck up with my friend Lisa's son, who is 8. His first playdate with M prompted Lucas to announce that his "best friend in the whole world" lives in Idaho. Both Lucas and M are about the same size, so I think they forget that M has 3.5 years of sophistication on Lucas. This is going to work out well as I try to nurture Lucas's nascent interest in reading: "Lucas, M reads at a third-grade level. Why can't you?" (I kid!) (Sort of!)

Lucas also started two weeks of swim lessons yesterday; his class consists of Lucas and one newly four-year-old boy. In just two half-hour sessions, Lucas has grown considerably braver; he's always liked going to pools, but never been a fan of putting his face in the water. I think it helps that the instructor has a ton of toys that distract Lucas from the fact that he's getting his face wet. Here's a glimpse from today's lesson: 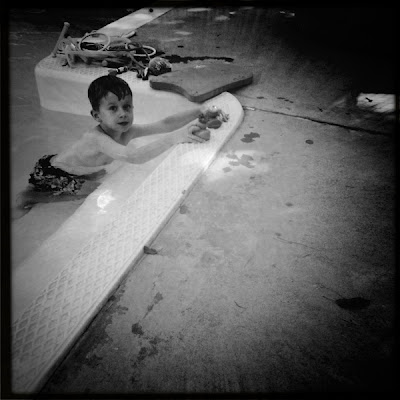 Last week I took Lucas to the local state history museum, and he adored it. Really, truly adored it--and it's not particularly geared toward kids. After seeing so much of Fang emerge in Lucas, it's nice to see a little bit of me awakening in the boy's genes. In the museum's gift shop, we bought a couple geodes for him to smash open, but I have to admit I was also tempted by these: 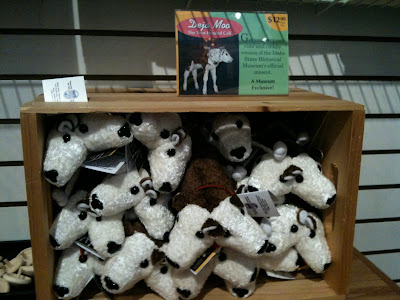 Seriously. Click to embiggen.
He's not just interested in history, but in natural history as well. At one point on our drive to Idaho, we pulled over in northern Nevada or southern Oregon to stretch our legs, and we encountered thousands of grasshoppers. Lucas was fascinated by them (as was our puppy), so you can imagine his delight when he was able to capture a couple at a playground the other day: 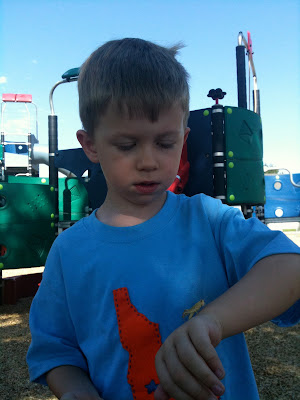 He kept trying to shield the insect from us, as if we'd try to take it from him, though I can assure you I've never snatched a bug from the boy's hands, even though I may be quite fond of certain species. 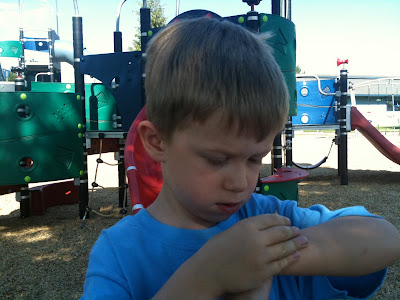 Lucas really likes this particular playground, though he hasn't explored most of the equipment, which is of the increasingly trendy EVO type I'm seeing on more playgrounds. Here's one of the most conventional pieces on the playground; I'll try to get more photos on our next visit. 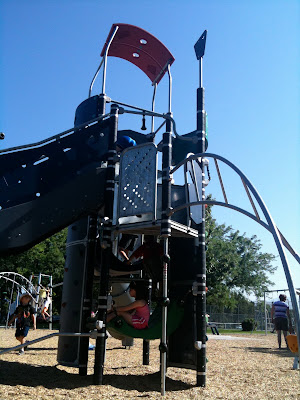 I was worried about raising Lucas in an overwhelmingly majority-white city, but I'm learning that there are places to go to expose the boy to more than just WASPs. We went to get him a library book today, and the children's section is packed with multicultural literature. And if we go to a particular WinCo supermarket at noon on Sunday, after the churches have let out, there's an amazingly diverse cross-section of Boise society there, in terms of both race/ethnicity and class. (Alas, the food there is not as ethnically interesting. You should see the number of fried potato side-dishes available in the freezer section!)

So far, Idaho is for Lucas a nature park, a science center, a history museum, a zoo, some nice parks and playgrounds, a new friend, a couple of pools, some grasshoppers, some backyard dirt to dig in, a bigger bedroom, a badger, twin fawns, and an armload of books checked out on his new library card. Fang and I may be hitting some bumps in the life-shifting road, but Lucas is cruising happily along.
Posted by Leslie M-B at 10:05 PM 7 comments:

While I was out in the yard with the dog this morning, I heard the neighbor's dog barking and thought it was trying to push its nose under the fence.

"Hey," I thought, "That little dog looks a lot like a badger."

So I climbed up onto the fence to get a better look. 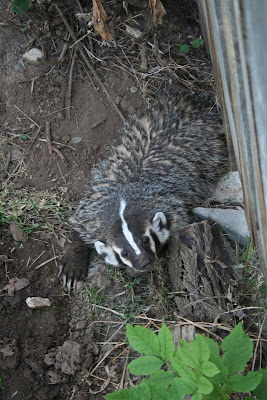 Tip: Hanging over your neighbor's fence with a camera might be an awkward way to meet your new neighbor, unless you have an icebreaker like, "Say, did you know you have a badger in your yard?"

I'm a little worried that the badger didn't seem afraid of the dog. Or, really, me.
Posted by Leslie M-B at 7:46 AM 8 comments: