I went to the California Academy of Sciences a couple nights ago, and as I was downloading the photos from the visit I was picking through The Collected Poems of Amy Clampitt. The two streams began to merge for me, and I excerpted these fragments from the very long poem. They're discontinuous, but, I think, on a similar theme. (Click to embiggen.) 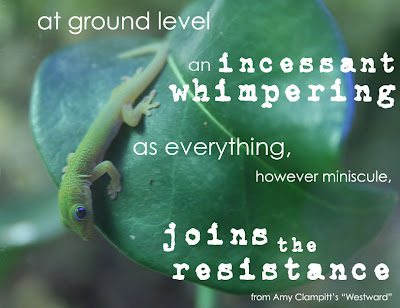 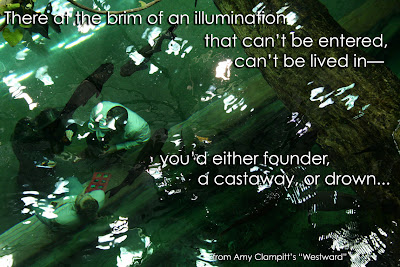 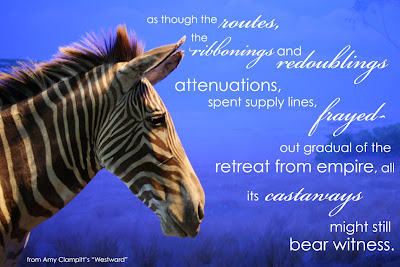 Labels: Craftmanic, Horsey goodness, What passes for science around here, Why yes I did major in English

Fang is in the newspaper industry, and he's already lost about a third of his income thanks to one publisher outsourcing part of his job to someone who can work less expensively. Because we met while both working for The Grunion Gazette, we have a soft spot for newspapers. Therefore, we're especially sensitive when we see newspapers closing. This video from the Rocky Mountain News, which published its last issue today, really hit home.

Or you can skip the heart-rending video and just read Fang's to-the-point explanation of how all these changes will affect us.
Posted by Leslie M-B at 9:07 PM 1 comment:

I love my job. I adore my colleagues. And I very much like the town I live in--and the fresh year-round produce that comes from living in this part of the country.

There's definitely a lack of opportunities for me to move onward here. The directorships of the campus units I'd like to lead are typically reserved for Senate (tenure-track) faculty members who rotate through the positions in 3-year terms.

Right now I'm classified as a staff member, even though I teach.

I figure I have a few years left in my position, as there's still plenty more I can do in it before the job feels less than challenging.

But a job possibility came to me in the form of an invitation to apply for the directorship of a new teaching center at a public SLAC. The director position is 50%, and it comes with a 50% tenure-track faculty position in the discipline most relevant to the director's Ph.D. and research.

It's also a college where I know some people who are doing awesome work inside the classroom and with technology. (I interact w/them via Twitter and blogs, and I have met them at conferences and even presented with one of them.) It's also a school to which I have a little bit of a personal connection because I was a student there for a semester.

SLAC + teaching center work + position in an American studies/history department + possibility of continuing to teach museum studies + living and working in a town 50 miles from what may be my favorite city = my ideal job.

So of course I applied.

It will be two weeks before I find out if I'll be invited to campus for another interview.

A new identity for teachers: from pitchers to catchers

OK, yes, yes, I know that blog post title has more than one meaning. Let's get our giggles out of the way before we begin reading, shall we?

I came to this post by way of Martha Burtis's meditations on lifelong learning and Dean Shareski's musings on what he should call himself (if not "teacher"). I'm also thinking about Martha's post about Barbara Ganley's 2007 Faculty Academy talk and pretty much anything Barbara herself has ever written on her blog about taking risks.

I found myself casting about for professions where people teach and nurture but where risk is involved. And when I re-read Dean's description of what he does--"I teach, I lead, I share, I encourage, I critique, I monitor, I connect, I care, I model"--I realized that the metaphor that for me best describes teaching is midwifery.

(photo credit: Voxphoto, used under a Creative Commons license)
During my entire pregnancy, my contact with medical doctors was limited to about 20 minutes. With the exception of one sonogram, one morning where we thought I might have preeclampsia, and one moment in the delivery room where an obstetrician popped her head in the room and asked "Is that baby going to come out of there?", my care during my pregnancy with Lucas was provided entirely by midwives. But the midwives were always there, rotating through my office appointments and my labor, reassuring with their calmness and cheer and expertise, answering all my questions on my prenatal visits and during birthing class.

While I'm sure I'm not the first to equate teaching with midwifery (especially regarding helping students to "birth" ideas), I wonder how many of us have examined this metaphor in all of its richness and utility. What I like most about it is that it reverses completely the metaphor of students as vessels to be filled. We're bringing something dynamic and lively out of students rather than simply pouring in static content. Again: We're no longer pitchers in the sense that we, too, are vessels that pour content into students. We are, like midwives, catchers.

How are the best teachers like midwives?
For the student, how is course-based learning like the birthing experience?
Practicing this form of teaching is risky. There's the possibility that you won't "cover" all the "content" you believe the students should know. And it's a real fear: every week I talk with faculty who ask me about coverage, who see themselves as pitchers more than catchers. Some argue outright with me about cutting back on coverage in favor of furthering critical and creative thinking. But increasingly--and maybe it's just that I've practiced my spiel enough--I'm finding faculty open to new ways of thinking about teaching, about letting students labor on more than just multiple-choice tests.

How are you making yourself less of a pitcher and more of a catcher? (Or do you think I'm totally off-base?)
Posted by Leslie M-B at 10:06 AM 3 comments:

As seen at New Kid's:

1.) Challenger space shuttle exploded (1986): At my grandmother's house, waiting for her to drive me to school that morning. Unlike many young kids, my fifth-grade class hadn't been following the Challenger mission, so I don't think I quite understood the gravity of what had happened. I remember being the first in the classroom that day and telling my teacher, who was writing on the board, that the space shuttle had exploded. "Is this some kind of sick joke?" she asked me, her eyes wide and face contorted.

3.) Oklahoma City federal building bombing (1995): In a British Lit II survey course. At the end of class, the professor said, "It sounds like something bad just happened in Oklahoma City. If you have family there, you should call them."

4.) OJ Verdict (1995): Walking down the loggia along the north campus dorms at my college. The dorm lounges, which were on the first floor and whose windows opened to the loggia, were packed with students. I remember hearing the howls of protest and disbelief when he was acquitted.

5.) Princess Diana dies (1997): I had graduated from college earlier than year, and I was living with my parents. We had just finished watching a movie on their TV set, and when we turned off the movie, there was a reporter talking about a horrible crash involving Princess Diana. Of all the events mentioned so far, this one felt the most surreal to me.

6.) Columbine massacre (1999): In the newsroom at the newspaper company where Mr. Trillwing and I met. (It was his birthday, and crazy shit always happens on his birthday or the day before, since both April 19 and April 20 have special significance to crazy people--and no, I'm not talking about potheads ("4/20, Dude!").

7.) JFK Jr. Plane crash (1999): Mr. Trillwing and I were on our first date--though I don't think he recognized it as such. I was moving to Iowa about a week later, so I was anxious to figure out whether whatever it was between us was going to work out and be longer term. But Mr. Trillwing would not. shut. up. about JFK Jr. As of that evening, I don't think they had yet found the plane, or they were hoping he might still be alive or something like that.

8.) Bush/Gore crazy election (2000): Working at the Long Beach Symphony Orchestra, surreptitiously checking the recount stats by refreshing my web browser every few minutes. Surreptitiously, that is, until the executive director asked me if I knew about the recount, and I showed him my screen. He then checked in with me a bit too regularly during the day. :)

9.) September 11 (2001): Mr. Trillwing and I had just moved to our current location two days earlier, and we didn't yet have cable or Internet hooked up. So Mr. T, who is a total cable news addict, had to do with fuzzy reception from rabbit ears and dialing into the Earthlink modem pool to get his news. He was going batshit crazy. And he said, the moment the first tower fell, "This country is about to take a sharp turn to the right." Truer words were never spoken.

10.) Space ship Columbia disintegrates (2003): I don't remember where I was, unfortunately, but I will say that you definitely should check out Edward Tufte's Cognitive Style of PowerPoint to see why (a) a PowerPoint presentation contributed to the death of the astronauts and (b) why you should never, ever teach with PowerPoint.

11.) Hurricane Katrina hits (2005): I was a few days from delivering Lucas, and indeed began labor in the immediate aftermath of the storm. I remember watching the news in the days immediately after Lucas's birth and just bawling. I was sad, and I would normally have been angry, too, but the raging hormones made sure I only did sadness that week.
Posted by Leslie M-B at 1:39 PM 2 comments:

William Butler Yeats's poem "The Two Trees" is among my favorites. Tonight I was playing around in Photoshop with my Wacom tablet, and I decided to try a little experiment. The results are below. This very brief project represents my first time using iMovie for anything but capturing video from the built-in camera on my laptop. I used GarageBand to record the voiceover, which comprises the first four lines of Yeats's poem.

It's rough, but now I've taught myself the first steps in one form of digital storytelling. Yay!