Just received notice that one of my journal articles was rejected--with a note that I should familiarize myself with the work of Leslie Madsen-Brooks.*

*There is, of course, the chance that one of my grad school profs or former colleagues was the anonymous reviewer, in which case ha ha ha--thanks for the shout-out.
Posted by Leslie M-B at 2:02 PM 9 comments:

Ah, I could play with this world names profiler all day. . .

Here are maps of my parents' surnames. When I say my people are from icy climes, I'm not kidding:

The map does explain the origin and utility of my ridiculously straight hair, however: no droplets from this morning's freezing fog are going to cling to it--they'll slip right off. 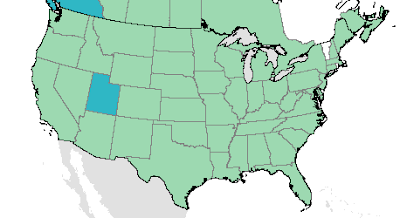 Labels: Grist for the cultural studies mill, Tall tales and true, What passes for science around here

I can't believe I missed this anniversary, but one of my favorite American speeches turned 50 a couple days ago. It was overshadowed by the mainstream media's hoopla of the 50th anniversary of Kennedy's inauguration, so I'm dragging it into the light here.

Labels: Grist for the cultural studies mill, In touch with my inner hippie

A few gems from Stephen Colbert

Colbert is on fire this week. If you haven't seen these clips, take a break--you deserve one!

What I'm about to describe is going to sound a little kooky to many of you, but I feel moved to share it.

I spent most of the last week in Portland, Oregon at a little place called the Playground. Founded last year by Havi Brooks, the Playground is home to several different interesting events, all led by Havi. I attended a Rally specifically for folks who have been members for at least a year of a group run by her.

We began each day with some really, really difficult Shiva Nata. (Disclosure: For me, all levels of Shiva Nata are difficult; there's a reason, after all, its practitioners frequently refer to it simply as "the flailing.") At one point Havi had us do some level 7, which is unbelievably brain-scrambling and resulted, for me at least, in a day-long series of epiphanies in a week already packed with them. Shiva Nata was followed by savasana, and then by some reflective journaling and setting of intentions for the work we'd like to accomplish that day.

There were ten of us on the retreat, all of us working on separate projects and giving one another mutual support when we became stuck on a particular part of our projects or when we felt stymied in a more general way. My fellow Rallions were all bright, creative women who were so delightful to finally meet in person after a year of communicating online. I suppose the best way to describe Rally is as a silent retreat punctuated by whimsy and play (and profoundly fabulous pie from a nearby café.) I accomplished so much in three days—lots of writing and planning, but after doing the work I felt less intellectually exhausted (my usual state) than exhilarated.

I've been reflecting, then, on how I can bring the spirit—and some of the physical aspects, because they're also central to the experience—of Rally with me to my home and work.

Some ideas:
Mostly, I want more play—more playgrounds—in my life at home and at work.

What about you? What are you trying out this semester or this year?
Posted by Leslie M-B at 11:57 AM 3 comments:

Labels: In touch with my inner hippie, Sometimes I teach, Tall tales and true

I'm writing a very practical, step-by-step guide aimed at undergrads in the humanities or social sciences (but also probably useful to advanced high school students and grad students who need a review) about how to write an argumentative essay. After a dozen years of teaching writing-intensive courses, I'm pretty confident about teaching the essay, so I'm approaching the guide as an (organized!) download of my brain onto digital paper. I'm going to give it to students in my classes and also maybe make it available for Kindle or as a PDF through ejunkie or some such outlet.

I've already received some great ideas about what should be included in such a guide, but I'd love to hear your thoughts as well. What would you want to see included?

I've drafted about half of the book, and I'm thinking it will come in at 40-50 pages single-spaced—longer once formatted into a book—plus worksheets and appendices. It's not a guide for last-minute, night-before-it's-due essay writers, but rather for students who really have no idea where to start and need a good deal of hand-holding between receiving the essay prompt and turning in the paper. Most importantly: I'm not looking for it to be the be-all, end-all compendium on student writing; I want to keep it under 100 pages when it's formatted.

On this first pass, I'm using a hiking/camping metaphor, though I may abandon it because it might be too precious—and it might not resonate with students who rarely leave an urban environment. Anyway, here's a rough section outline:
Additional topics covered in subsections or sidebars (listed below in no particular order):
As always, your thoughts are much appreciated.
Posted by Leslie M-B at 11:58 AM 7 comments:

Labels: Sometimes I teach, Why yes I did major in English
Newer Posts Older Posts Home
Subscribe to: Posts (Atom)