I'm working on the next Electronic Envelope for the teaching center where I work, and I'm including a brief article on the Edward Owens hoax perpetuated by Mills Kelly's class at George Mason University. I'm including the short piece here not so much for the text--which you may or may not find useful--but for the little pirate lemming I Photoshopped together. I'm just so amused with myself. . . 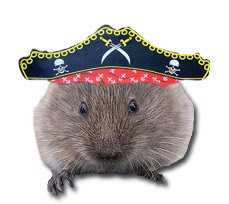 (photo credits: lemming • pirate hat)
Late this fall, Jane Browning created a blog about her senior research project on Edward Owens, purportedly the last American pirate. The site includes information about Owens, images of his last will and testament as well as a partial transcription of it, video interviews with history professors, a video of Jane exploring the area immediately around Owens's house, and a link to a Wikipedia entry that Browning created that passed review by the online encyclopedia's volunteer editors.

In December it was revealed that Jane Browning does not exist, and that the site was a hoax perpetuated by the students in a history seminar at George Mason University. The purpose of the hoax, according to an explanation on the project site, "was to spend time thinking about how easily information takes on a life of its own online, ethics in the historical profession, and the role of digital media in popular culture." The course syllabus (PDF) explains Professor Mills Kelly's learning goals for the course:

I do have some specific learning goals for this course. I hope that you’ll improve your research and analytical skills and that you’ll become a much better consumer of historical information. I hope you’ll become more skeptical without becoming too skeptical for your own good. I hope you’ll learn some new skills in the digital realm that can translate to other courses you take or to your eventual career. And, I hope you’ll be at least a little sneakier than you were before you started the course.

Do not miss Mills Kelly's post on the topic, and especially the comments section, in which some smart folks who were taken in by the hoax weigh in on the project.

This strategy--teaching about hoaxes, or better yet by perpetuating a hoax--has implications far beyond historiography and historical research. My colleague Mikaela Huntzinger immediately pointed out its potential in crafting a course in ecology, for example. I agree. I recall one of the harder exam questions from my undergraduate years, from the final of an interdisciplinary special topics course on animal locomotion, was something like, "You're standing in line at the supermarket and you see a tabloid that claims scientists have discovered an amazing creature" with certain characteristics--limb and spine length, range of motion, and so on. The professor wanted us to argue whether or not such a creature could exist based on what we had learned in class. In other words, we were to synthesize what we had learned in class to determine whether or not the tabloid article was a hoax.

It all reminds me of a larger, more complex, and much more fun version of the game Balderdash, in which players try to convince one another that their made-up definition of a real but arcane word is the actual one. Imagine a class on Romantic poets in which the professor asks students to determine which samples of blank verse actually are by Wordsworth--and in which the students get extra points if they submit, and other students fall for, their own faux Wordsworthian blank verse. (Hint: incorporate the word "gleam." Throws me every time.)

Have you taught with hoaxes? Have you fallen for any? (Sokal hoax or lemming suicides, anyone?) And how do you teach your students not to be so gullible?
Posted by Leslie M-B at 7:28 PM

Just have to say that I LOVE Balderdash. :)

Haven't taught hoaxes, per se, though have certainly discussed a variety of them along the way as is relevant to the literature we're reading.