Wrestling with my demons

Something you may not know: There's a reason this blog ranks #1 in Google for the exact phrase "depression in academia."

Some of you already know that I am an exceptionally high functioning depressive, thanks to antidepressants and a desire not to embarrass myself too horribly at work or in school. I know the depression is there, kind of like the spider I let live in the houseplants or behind the washing machine because I suspect its presence has some utility, but most of the time it doesn't bother me. 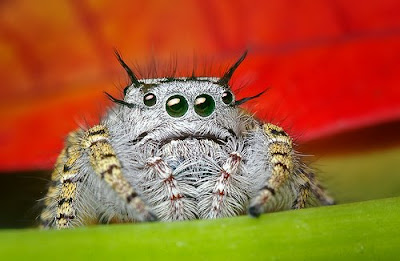 Spider photo by Opo Terser, and used under a Creative Commons license
Every once in a while, though, the spider decides to jump out of its hidey hole and onto my skin. You know, where spiders totally do not belong. It happens a couple times a year, but not like clockwork. I never know when I'm going to have a bad week, in large part because it seems to be as much chemically triggered as environmentally.

Today I indulged myself in a nap that was, Mr. Trillwing pointed out, likely inspired by depression, which has been exacerbated by the still-giant stack of papers on which I've been commenting for the past few weeks. These papers, portions of M.A. theses, are not in general terribly written, but they are long, a chapter or two from each student, which means 15-60 pages from each of 14 students. They're taking me a lot longer than usual. Usually it takes me no longer than half an hour to read a 15-page paper. These are taking hours each because they need so many comments and so much mental energy from me--after all, these are not 6-10 page undergrad papers; they are sustained works, the kind I'm more used to writing or reading than I am commenting on. I should probably remind you that this is work I do on top of my full-time job at the teaching center. . .

Anyway, depression plus paper grading always equals a deeper depression. Throw in house cleaning, food prep, and yard grooming for tomorrow's BBQ guests, and I just want to crawl into bed and forget about the world awhile. I feel so tired, so apathetic, and yet so guilty about not wanting to do anything, because the result looks an awful lot like chronic disorganization and procrastination.

In addition to making me not want to do any work at all, the depression also makes me tunnel inward and backward. I gaze all the way back to about third grade, when I began to become aware of the metaphorical spiders in my mental houseplants. Yet I didn't get any kind of treatment until a while after I met Mr. Trillwing; he pushed me to address the problem in January 2001, when I was 25 years old.* And for the most part, since then, things have been fine.

But I still lament missed opportunities. Many colleagues marvel at my productivity, even though I don't feel productive at all. I often wonder what my life would have been like had I not been depressed. I'll never know, unfortunately, so I work with what I have.

This week, I'm living with spiders.

What a thoughtful post! Sending along much empathy as a fellow depression sufferer. And the following is a perfect description of how I so often tie myself in knots, too: "I feel so tired, so apathetic, and yet so guilty about not wanting to do anything, because the result looks an awful lot like chronic disorganization and procrastination." Wow. I had never thought before about how the grading stress may affect the chemicals...am going to have to pay attention to that. Anyway, wishing you the best! Am glad you took a nap and am applauding your motivation to host a BBQ. Good luck with the rest of the papers, too. :)

Huh. That sounds a little too familiar, without the amazing productivity. (I'm also getting more and more spacey and am having trouble articulating thoughts.)

You know, you're exactly the age that I thought you were. (But of course, I'm five years younger than you.)

Thanks for writing so honestly about your spiders. I hope that they soon scuttle back behind the washing machine and that life looks better again.

I've never been diagnosed with clinical depression, but I've definitely had my share of down times that required the help of therapists. The last one of these was in January, which I ended up not needing therapy for, but was definitely close to it. And it is weird because I recognize it's a reaction in my brain that I can't do much about.

I could totally relate to: "I feel so tired, so apathetic, and yet so guilty about not wanting to do anything, because the result looks an awful lot like chronic disorganization and procrastination." When I'm feeling down, this is exactly what happens. I shut down, and yet, I'm plagued by guilt, thinking constantly about what people must be thinking.

All I have to say is to tell you to be kind to yourself. And you have lots of people near and far who care about you.

It's important for us to be able to tell these stories--what honesty and thoughtfulness. I'm glad (and not surprised) that Mr. Trillwing has been a force helping you to address the depression. Wishing you good naps, good grading, good movement along the chemical cycles.

P.S. to the grading? Get a rubric, go quickly, and read the worst ones first. Do the papers in sets. Reward yourself after every set. Time yourself so that you only give X amount to each one and each set.

This structuring of the grading has helped me lots. It gives perspective--grading matters, but it does not deserve to take over my life. And work expands into the time you give it. Sucky work deserves less time.

And remember, half the time, students don't/can't/won't read comments. I certainly didn't, when I was a student!

Sorry to hear you are having a spider week. I told you a spider seems to have bit me on the boob too. Weird.

Also, you are not dowdy.