As regular readers know, I grew up in Long Beach, California, home to one of the largest ports in the U.S. and to a number of offshore oil platforms and oil islands. 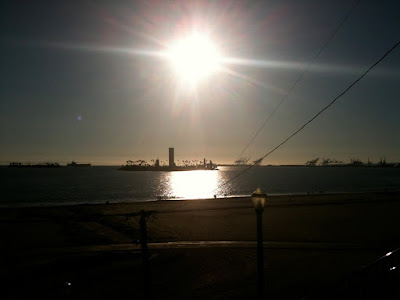 Long Beach horizon, looking southwest, Christmas Day, 2009,
with ships, oil islands, breakwater, the cranes of the Port of Long Beach,
and smog obscuring Catalina Island. Isn't it lovely?
Accordingly, oil freighters were a common sight on the horizon, and I learned early on that the less oil on board, the higher the tanker rode in the water and the more I could see of the broad red stripe on its hull. Tanker photo by Tom Wahlin, and used under a Creative Commons license
Friends, my ship is full. I'm weighted down—with good things and bad things, terrific opportunities and terrible challenges—so much that the red stripe is completely submerged.

I don't think I can sufficiently express how awesome this particular new job promises to be, and how grateful I am for the opportunity and for the support my excellent new colleagues continue to show me.

Because—and this bears repeating—it is a tenure-track job. In history. In one of the crappiest years for history jobs in quite some time.

And I don't have a degree--any degree--in history. I mean, I'm an historian, but I didn't arrive here via the usual route. So while this new position is very much what I've wanted for longer than I care to admit, I'm still a bit surprised because, you know, after so many years on the academic job market, one gets more than a little beaten down.

We'll move in late July or early August. I don't know yet when we'll fly up to look for a house to rent; in my current burb, the leasing market for the fall begins in January (yes, you read that correctly), but Craigslist has plenty of affordable, decent-looking housing available immediately in the new city, so I'm guessing we'd only be wasting time and money if we flew up there this week to try to secure housing for late summer. We also need to find a preschool. My new colleagues have been awesome, offering me temporary housing and cars and assistance finding schools, which is a huge relief.

Yet there's all the stuff that's attendant with moving: turning utilities on and off, figuring out internet and TV service, convincing potential landlords that a big dog isn't necessarily a liability, finding enough boxes and packing supplies, weeding out old crap we should have tossed years ago, holding a yard sale. It's all in the service of an exciting new chapter in my life, but the road there is still a bit too long and rough for my liking.

Plus, as my peripatetic blog readers know, moving is difficult emotionally. I've lived in this town for a decade, nine of those years in my latest stint here with Fang. Lucas was born here. I have made some very close friends here, and although I've become used to the comings and goings of friends and colleagues in a university town, I had begun to assume that we'd be here for quite a while longer. So I'm in the process of detaching myself from the town, while promising that I'll keep in touch with friends.

This morning Fang learned that a newspaper that provides more than half his income has been sold. Everyone was let go today, and the publisher didn't even bother to call Fang to let him know--Fang heard through the previous publisher, who was busy extricating herself from the last little legal connections she had to the business. His coworkers who live and work in the town where the newspaper is located were fired by voicemail or learned the paper had been sold when they showed up for work and saw the furniture being removed from the office.

Need I point out that we have some moving expenses coming up? Sure, the new university covers much of the household moving expenses, but there's a lot of other stuff for which we'll be footing the bill.

I could write so much more, but I'm going to stop here before I feel too defeated by the stress of a couple class preps in a discipline in which I've never taught, diving back into research, keeping up my energy in my current job, planning a 600-mile move, scraping together some additional freelance income for Fang and me because I'm furloughed and he's half-jobless, and and and.

Because really, on the whole, I'm crazy excited and optimistic when I think on the scale of months and years. But days and weeks? Those are hard right now.

As I said, my ship is very full. It's going to take some time to slow it down enough to make a significant change in heading. 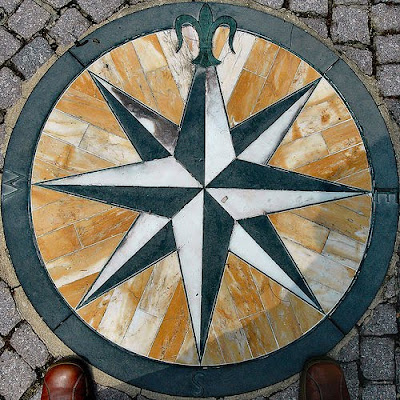 Compass rose photo by Thom Watson, and used under a Creative Commons license
Posted by Leslie M-B at 4:33 PM

Wow! That's a lot of excitement and scary at the same time. (And have I said "congratulations" yet? Congratulations!)

Am I correct in thinking that the cost of living in the new location will be lower than that in California? I know that doesn't make up entirely for the loss of half of Fang's income (Which I'm so sorry to hear, by the way) and all those moving costs, but maybe that will help a little?

The dog is a liability, but at this point, so am I. I'm newly inclined to give the dog a second chance...

Ahhhh!!! I totally know how you feel (minus the responsibility of the job, since I'm just following my husband at this point). I will blog about this very subject soon. I'll start today, but for me there's more to "explore" (since moving always brings me back to the "mother-of-all-moves" -- the day we left the country where we'd lived for 25 years of our lives to start anew here. Sigh.

I'm sorry about your husband's job loss and I hope everything works out financially for you on this move.

In spite of everything it's very exciting, too bad it's a scary kind of exciting... We'll pull through, I'm sure.

Sail on. The clouds will clear, and the wind will blow just right, in time.

Good luck turning the ship. That's a lot going on!

When we were getting ready to move 2 years ago, I found this blog post:
http://www.northofthe49.com/blog/?p=116

which gave me a few good tips--so I've been passing it on to anyone else moving. YMMV of course.