Excuse the expression, but you're screwed--stuck between the law and a lawyer.

This is the situation facing teachers in Juneau County, Wisconsin, where D.A. Scott Southworth is claiming such instruction encourages sex among minors.

The Milwaukee Journal-Sentinel reported on the impasse:

The new law "promotes the sexualization - and sexual assault - of our children," Southworth wrote in a March 24 letter to officials in five school districts. He urged the districts to suspend their sex education programs and transfer their curriculum on anatomy to a science course.

Southworth believes classroom discussion of how to properly use contraceptives will lead not only to sexual activity between minors, but sexual assault on minors. In a letter (PDF) to school districts in Juneau County, Southworth warned,

The teacher need not be deliberately encourage [sic] the illegal behavior: he or she only need be aware that his or her instruction is "practically certain" to cause the child to engage in the illegal act. Moreover, the teacher could be charged with this crime even if the child does not actually engage in the criminal behavior. Depending on the nature of the child's behavior, the teacher could face either misdemeanor or felony charges with maximum punishments ranging from 9 months of jail up to six years of prison.

It's preposterous that teachers would reasonably believe that instruction on contraception could lead to sexual assault. According to data from the University of Wisconsin Health Institute, Juneau County's teen birth rate is approximately 25% higher than the state average, and the county ranks 62 out of 72 Wisconsin counties in the Institute's health behaviors index (which includes such data as chlamydia infection rates, smoking rates, smoking during pregnancy, binge drinking, and the teen birth rate). Clearly, this is a county where young people need some instruction on health.

Jim Schmidt, a member of the Juneau County chapter of Pro-Life Wisconsin and father of seven, believes that parental involvement, not school curriculum, is what will have the greatest effect on sexual health outcomes.

"They haven't had [sex education] in Necedah schools for 15 years and everything is fine," he said. "That is a parent's responsibility. If they don't know how to handle it, they need to talk to their doctor."

Ranking in the bottom 14% in a state's health index is not an indicator that "everything is fine." Indeed, those states (typically the most religious) that discourage teaching about contraception have the highest rates of teen birth.

Southworth's behavior is part of a trend of D.A.s in the U.S. bringing the power of their offices to bear on families and individuals in ways that might not be entirely appropriate. Southworth holds an elected office, as do all D.A.s in my home state of California.

D.A.s overstepping their power has raised considerable concern in my part of the country. A Facebook group called "What a Difference a DA makes" claims that "The DA is the most powerful elected official most voters have never heard of." The Facebook group was created by the American Civil Liberties Union's District Attorney Campaign, whose webpage explains,

Voters from every county in California elect one attorney whose job it is to speak "for the people" in the criminal courts. The primary duty of the District Attorney (DA) is to promote the safety of our communities by prosecuting those who break the law. As the "peoples' lawyer," the DA is supposed to serve the interests of all members of the community and to enforce the laws without prejudice, bias, or political purposes.

A great deal of power and responsibility lies in the hands of District Attorneys. Yet most voters don't pay close attention to the positions of DA candidates. Many voters simply skip this box on the ballot. Even editorial boards of newspapers often do not bother to endorse DA candidates. Without involvement from voters, community organizations, opinion leaders and the media, the immense powers that we put in the hands of DAs will go unchecked.

Definitely check out the Facebook group's news feed, which contains an alarming number of reports of D.A.s overstepping their bounds.

In my own county of Yolo, California, for example, D.A. Jeff Reisig's office has come under increasing scrutiny for potential discrimination against defendants of color, as well as what some are calling the "Cash for Convictions" program, and others call Balance Sheet Justice. Under this program, counties receive grants for convictions of people for certain categories of crimes, which means Reisig's office has an incentive to seek conviction over justice, and indeed, Yolo County has one of the highest rape prosecution and conviction rates in the country--and according to Rev. Ashiya Odeye of the local Justice Reform Coalition, arrests of white men for rape have dropped dramatically during Reisig's tenure, while prosecution of men of color for rape has increased sharply. 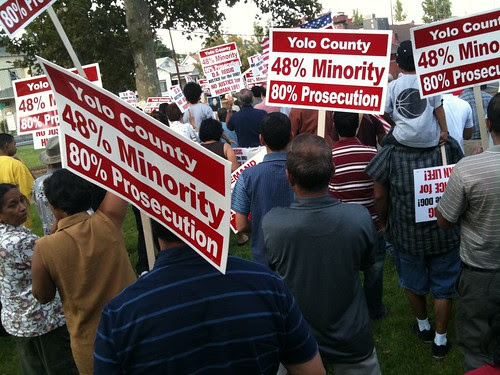 Of particular concern in my county are the shooting by undercover sheriff's deputies of Luis Gutierrez and the 378-year prison sentence given to dark-skinned Nepali-American Ajay Dev, who was convicted of rape, while white child molester Brett Pedroia served only 8 months of a one-year prison sentence.

In the Dev case, the D.A.'s office charged the defendant with 92 crimes, which all but ensured the (almost entirely white) jury would perceive Dev as guilty as soon as the trial began. Dev's supporters maintain he is innocent of the 750 rapes of which he was accused by a woman whose U.S. citizenship apparently hinged on Dev's conviction.

If you live in the U.S., there's a good chance your jurisdiction has a district attorney, and a good chance as well that you have the opportunity to elect candidates to this office. Unless you want someone like Southworth or Reisig currying political favor through interference in curriculum and health or through heavy-handed prosecutions that may favor convictions over justice, start your research now. To help you get started, the ACLU offers some really good questions to ask candidates for district attorney.

I'm fed up with transparent abuses of the legal system; the increasing misrepresentation of U.S. history for political ends; and the general state of science, health, and history education in U.S. primary and secondary schools. I believe these three challenges are connected. Expect to see more from me on these issues, but particularly the public use, misuse, and abuse of history, very soon.

You're right, about me at least. I didn't realize DAs were elected. I should have, but I didn't. And the Wisconsin thing. Wisconsin is so screwed about so many things, and does it to itself, so to speak. :(