Caution: I may be channeling Fang. 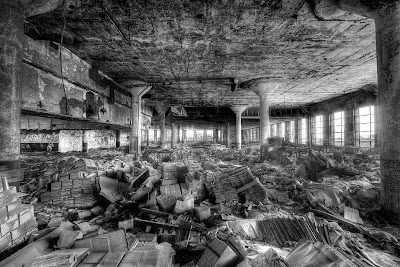 Photo by Shane Gorski, and used under a Creative Commons license.
In recent years, I haven't been prone to pessimism, but I'm beginning to believe that the Republicans won't be satisfied until we're all living in heavily armed survivalist compounds outside of dead (liberal!) cities. Only then will we have achieved the vision of the Founding Fathers--only it will be a twisted, post-apocalyptic version of Jefferson's agrarian middle landscape.

I know I need not provide much evidence on a national scale to readers of this blog, but may I share a few highlights gleaned from a few of the blogs I read, and only from the past few days? (Then, my friends, only then shall we turn to the clusterfuck that is Idaho.)

First, there's Historiann's post about representation without taxation. She sums up the Colorado governor's delusion plan to make the state more "pro-business"--the plan is awfully familiar to those of us a bit to the north and west of Historiann--and then provides this commentary:

What a brilliant “pro-business” plan this is! Absolutely everyone wants to move their businesses to a state that’s cutting education! It’s so easy to get your employees to see the advantages for their children of attending schools with huge class sizes and no “extras” like music, art, sports, or anything that’s not covered on the Colorado Student Annual Progress (CSAP) tests. And if they love that, they’ll love the nonexistent state support for universities here! (And guess what? Republicans here are lauding the governor’s “seriousness,” while Democrats are treating Hick’s budget like a flaming bag of poo left on their doorstep.)

We get the politicians we deserve. The fatuousness of these conversations among our elected representatives reflects our own unseriousness as citizens. We expect to enjoy quality schools, universities, parks, roads, hospitals, medical care, emergency services, low-income assistance, prisons, public transportation, and all other services without paying taxes. We’ve been living off of the crumbling infrastructure Americans invested in fifty years ago and more, expecting that nothing would change and that no further investment was required.

Then there's Bardiac's upper-Midwest state, which has been in the news quite a bit lately for its attempted pounding of public-sector labor unions. She provides a round-up of Republican plans to, for example, eliminate health insurance and pensions for "limited-term employees" (who, she points out, are mostly women), as well as cut funding for Medicaid, so that even the children of these newly health-insurance-free employees won't have access to affordable healthcare. She then nicely details the difference between pro-business factions and those of us on the front lines of public service and in particular education:

There's some bluster on both sides, of course. But the bluster of state workers is so much less effective. I was thinking about how ineffective our bluster is.

And here's what I figured out: our problem is that we actually care.

We value education and care about educating our students.

We care about doing jobs we think are important enough that we take less pay than we'd get in the private sector (it's in the news, not just some opinion I have).

So we aren't going to mess with students or do less work.

Can I hear another amen, people?

Why so glum? My nature perhaps, and the fact that these are discouraging times. But more importantly I don't have a great deal of confidence that the Democratic Party will do anything to stop it. As with abortion rights or gun control, Democrats have stopped fighting very hard for unions. They're pretty much absent from the public debate on these issues, which means that one one side you have a barrage of relentless propaganda and on the other....nothing.)

And then, via Shark-Fu, we learn of a particularly asinine proposal to eliminate child labor regulations in Missouri. Here's the summary of the bill from the state website:

SB 222 – This act modifies the child labor laws. It eliminates the prohibition on employment of children under age fourteen. Restrictions on the number of hours and restrictions on when a child may work during the day are also removed. It also repeals the requirement that a child ages fourteen or fifteen obtain a work certificate or work permit in order to be employed. Children under sixteen will also be allowed to work in any capacity in a motel, resort or hotel where sleeping accommodations are furnished. It also removes the authority of the director of the Division of Labor Standards to inspect employers who employ children and to require them to keep certain records for children they employ. It also repeals the presumption that the presence of a child in a workplace is evidence of employment.

(Take a moment to pry your jaw off the ground. I'll wait. I'll use the time to teach Lucas how to earn pennies an hour on Mechanical Turk.)

Quips Shark-Fu, "I’m guessing that [state Representative Jane] Cunningham, ever a faithful minion, consulted Satan prior to filing this shit."

Now that we've finished a rapid tour of flyover America, let's take a look at my far-flung corner of Real America.

Via Sisyphus at 43rd State Blues, I learned about the blog of state rep Nicole LeFavour, a Democrat who represents my favorite parts of Boise. LeFavour penned a post titled "How to Tank a State Economy: Easy Steps for Lawmakers." It's worth reading in its entirety, but it's such a well-organized post that it's possible to outline it here.

A. Lay off as many state employees as possible

C. Be sure that businesses doing contract work for the state go bankrupt

D. Repel Businesses Seeking to Move into Your State

A. Force Families into Crisis

D. Increase User Fees for Everything

A. Turn away federal matching funds or any form of money paid to the federal government by taxpayers in your state.

B. No matter how well the national economy is recovering, predict doom for your own state.

A. Nothing says economic disaster like death and out migration.

But really, this outline doesn't do LeFavour's post justice. Click through to read it yourself, but here are some of my favorite recent Gem State hijinks (and their results, many of which have been realized) she suggests the state should pursue if it really wants to fail big:
May I add "Have your State Board of Education suspend faculty governance at your state universities"?

Goddammit--I don't have time to become a political activist.

Yet I heart Nicole LeFavour. It's nice to know there's someone so bright and articulate in the statehouse. When Fang gets back on his economic feet (see: We Moved to Idaho), we'll definitely be donating to her campaign fund.

What's your state doing to transform itself into an environmental, economic, and educational hellscape?
Posted by Leslie M-B at 7:08 AM

Labels: Grist for the cultural studies mill, Wait. . . We moved to where?, Whining Exhortation and Angst

And the truly horrid thing is that this is what the Right wants: Grover Norquist drowning government in the bathtub so we can all go out and . . . forage or something. Not that the rabid chorus of Tea Party will notice that--to them it's all just Jesus and Personal Responsibility.

Thanks for the link, Leslie. Over at More or Less Bunk, Jonathan Rees has some intel about the coming implosion in Nevada's universities, too.

I love that list from your state legislator. Sometimes I feel like it's 2002 again and the U.S. is building up to invade Iraq. Once again, we're right in knowing in advance that the whole mess will be a costly disaster, and once again no one who has any power is listening.