My husband makes fun of my model horse collection sometimes, but his own superhero menagerie is every bit as dorky, I assure you. His latest kick has been to buy cheap-ass figurines that come with part of a bigger toy. He has to buy six smaller toys in order to assemble the larger one. While at first this seemed like an innocent enough diversion, his hunt for the best deal on, say, Galactus's right leg has taken him over to the dark side of retail. 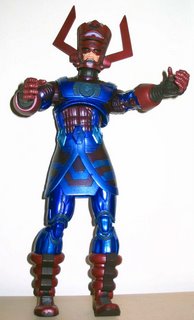 Maybe I can blame our son, Stinky McFussington, whose moods sometime require the soothing rhythms of freeway fathering, a 10-mile drive up and back the rural highway to the neighboring town. But somehow Pete discovered Wal-Mart, a store he had previously used only for cultural spelunking expeditions on a cross-country trip ("Oh, oh! I must have my photo taken in the rifle section!" he exclaimed, shoving his tongue under his lower lip to look as if he was packing chaw). And now suddenly he's stalking the aisles of America's Most Evil Supermart for body parts.

Sure, he could go to the more pedestrian Target—it's the same distance from home, along the same route—but there's something fitting about seeking the Devourer of Worlds at the Devourer of All that is Fair and Just.

Of course, he can't stop with just one megafigure. Now he's on the hunt for legs for this fine fellow:

Exhibit B: The Shiny Dude 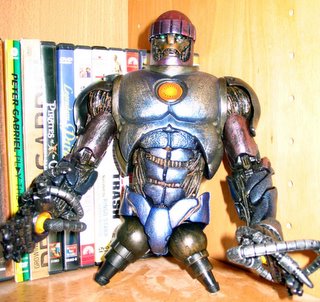 Excuse me while I wax metaphorical, but Pete's search for these figures parallels my own quest to finish The Dissertation, Devourer of My Soul. I find I have to buy into all these little theories in the hopes of assembling something bigger and shinier, borrowing an arm from Foucault, a torso from Sandra Harding, a leg to stand on from Donna Haraway. And in the end, who knows if what I'm building will have any value beyond its constituent parts?

What's most worrisome in this analogy? Pete sometimes buys TWO of each figure and keeps one wrapped in its plastic case, an untouched hope for the future. Me, I'm tearing into all the packaging, pillaging what I can for the here and now, articulating joints haphazardly in the hopes of creating some recognizable, and not too Frankensteinian, creature.
Posted by Leslie M-B at 11:52 AM