Some time ago I wrote that Lucas had thrown a couple of his little trucks at my laptop's screen. At first the cracks were barely visible, but in the past month, the LCD screen has been hemorrhaging royal blue and hot pink pixels.

Apparently my digital SLR camera--or at least my skills with it--can't adequately capture the awfulness that is my screen, and a screen shot doesn't work because it's the screen itself, and not the images transmitted to the screen, that's faulty.

But I'll share anyway. Imagine each little pink or blue spot you see as a cluster of vertical lines about a quarter-inch long. 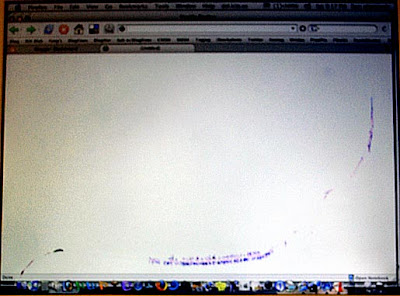 I consulted with the computer support guy at work about the problem, and he suggested playing a video for 24 hours that flashes red, green, and blue in an attempt to unstick the pixels. That worked a little bit, but every time the computer went to sleep, it would wake up with the pixels returned to their nasty state. And any text under those pixels? Unreadable.

So. . . I broke down and ordered a new LCD screen. I've been watching them on eBay, and they get bid up pretty high, so I bought one with a "Buy It Now" option. They're not cheap, people. Bleah! Let this be a cautionary tale: keep your LCD screens away from toddlers with good throwing arms.

I handed my tax packet to my enrolled agent today. Here's hoping I (a) get a tax refund and (b) it's very, very large.
Posted by Leslie M-B at 11:09 PM