You might say what happened today at Virginia Tech is not "everyday life." I say it is, only it was concentrated violence against middle-class students on a pretty campus in what seems to be a nice town. Truth is--and we all know it, even if the news stations don't acknowledge it--people die as a result of gun violence in this country every day, all day long.

It's enough to make this atheist a Friend. Seriously. As soon as Lucas can sit still for the first part of Meeting, we're hauling him there to learn about nonviolence (and establish a record for him as a conscientious objector, should he decide to be one when the inevitable draft occurs).

In high school, I had two political causes about which I was very passionate: gender equity and gun control. I've mentioned in the past that I attended Snoop Dogg's alma mater during the Los Angeles riots, and that my school had a large population of gang members. Besides always having been a pacifist of sorts, it was very much in my own self-interest to advocate for gun control, you know?

And then when I was in college, we had Dunblane, which just made me sick, sick, sick. And it didn't even take place in a country that had much gun violence.

Fast forward to Mr. Trillwing's birthday in 1999. We were both working at the same newspaper when news came by Internet and phone that something was going on at a high school in Colorado. All day we watched TV coverage of it as we wrote our provincial little stories about parking meters, tree trimming, and sidewalk repair.

II. On the books

Let's take a look at Virginia's gun laws, shall we?

While gun laws in Virginia restrict the sale of handguns to minors, juveniles can easily obtain other kinds of guns. According to StateGunLaws.org, "There are no limits on selling or giving kids 12 or older rifles, shotguns or even assault weapons - without even parental permission." Child safety locks aren't required. Does the state require licenses or permits for gun buyers or owners? Nope. Does the state mandate a waiting or "cooling off" period before buying a gun? Of course not! But hey--good news--it's illegal for people with concealed weapons to enter a school.

Raise your boys well. Teach them to respect human life, and especially women's and girls' lives. And teach your girls to settle for nothing but full respect from others, to require everyone to recognize their humanity. Would a bit of feminism have saved the young women killed today? Not on its own. But would the young man have gone on a homicidal rampage if he had deeply held feminist principles? Probably not.

Because this violence is so tied up with gender and sexuality. Look at Don Imus's comments about "nappy-headed hos" and about how the women of Rutgers' basketball team were big, tough, tattooed women. Basically, he accused them of being at once masculine and loose, and tied it up with a pretty racist ribbon.

It's a man thing, this violence. It's a patriarchal thing that cuts across race and class. Yes, I know there are plenty of peaceful men out there. But there are also men who lose their tempers too easily, who throw things, hit their (usually female) partners, who drive dangerously aggressively, who drink too much, who hurt animals, who abuse their children, who set things on fire, literally and metaphorically. And if you don't speak out against this violence when you see it or hear it, you're complicit. Period. If you're in danger in a heated moment, step away. But then speak later. Always speak.

And so I speak: You never hear about a "lone gunwoman." It's always a "lone gunman." You know, like a lone wolf, a rogue predator. An alpha male--an angry straight man, or perhaps a gay man frustrated because he can't express his full sexuality in our uptight culture where talk of sexuality is dominated—or, rather, silenced—by zealots of many so-called Christian faiths.

It's time, too, to speak out against the anonymity inherent in our schools, the conveyor belt, public or private, that spits out students after running them through the filter of a few standardized tests--and then relegates them to universities like Virginia Tech, universities that are considered good but that have courses, as does my current institution, of 500 students or more. What are our students learning in such contexts? That anonymity rules on campus. That no one knows your name, no one cares, that you're totally free to act however you want because, even when it counts--for good or ill--no one knows your name. You're only a vague memory, someone's freshman-year lab partner. 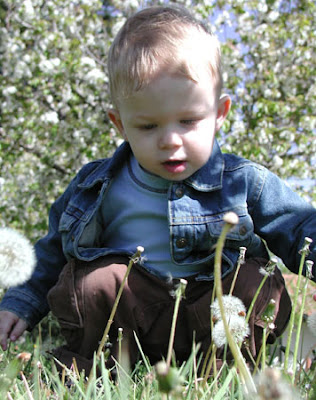 I spent this evening walking with 19-month-old Lucas through a small sunlit orchard and vineyard, around a village green, and through a park. We blew dandelions and watched birds and petted cats and sniffed roses and played on the swings. In short, we cultivated gentleness. Does that make my boy a sissy? I don't think so. It makes him conscious of all the living and dying things, of the beauty and temporal nature of the here and now. My greatest hope is that one day he'll stand with me in objecting, consciously and conscientiously, to the everyday violence of American life and to the ways we hide this violence by heralding mass casualties as something out of the ordinary.

Peace be unto you and yours, whether you be in Blacksburg or elsewhere.
Posted by Leslie M-B at 9:18 PM

Labels: Grist for the cultural studies mill, In touch with my inner hippie, Mamablogging, Whining Exhortation and Angst

I think Lucas has inherited his mom's tendency for naturalizing. He's a sweet kid. :)

Bring on the Quakers!

GeekyMom is right - this is far and away the best response to the events of yesterday.

Thank you for your enlightening point of view, so well-written....

I've hardly known how to put this into words. Especially today, as I read through the list of the victims. Somehow, even with a university so far away, so many of those names hit close to home: a German instructor. A Holocaust survivor. (Honestly, the story about Liviu Librescu stepping in and barracading the door, at the same time as watching our province's Holocaust Remembrance Day vigil on TV in which a survivor was talking about the horrors that he's witnessed... that brought on the tears for me.) Even the identification of the shooter as a young man born in South Korea.

It was all too familiar, for this little German historian, teaching at a sheltered West Coast campus. Far away, and yet so close to home that I couldn't handle it.

So, thank you for your perspective. And boy, do I ever agree. Thank you for reminding me exactly why I stand up against violence.

I loved your writing... only to live in such a world. I pray that some day we all do.

I'm not a violent man. I have never been in a fight, but I have always stood up for myself.

I also own a handgun, and several other weapons. I do not hunt, but I spend a lot of time at the range. I am not a police officer, or a member of the military. I do not seek, and I make every effort to avoid danger and confrontation.

But I stand ready, in case I do.

VT was, in fact, a Gun Free zone. Students and facility where forbidden from possessing defensive weapons. Even if trained and issued a Concealed Weapon Permit by the state.

I can't help but think that if just one of the students or facility members would have had the training and the ability to possess a defensive weapon the outcome could have been so much different.

Anonymous (@11:05 a.m.): I appreciate your perspective, but as an instructor, I must say having armed teenage students in my classroom is one of my worst nightmares. Nor do I feel called upon to perpetuate the violence myself by carrying a concealed weapon to class in my backpack.

And yes, in my post, I acknowledged that all schools in Virgina are gun-free zones. And they should remain such.

I really don't think more guns are the answer.

Cultivate gentleness, indeed. We need far more of it.

Trillwing, thank you for this excellent post. I so very much agree with you.

This post is smart and right and beautiful. Thank you.