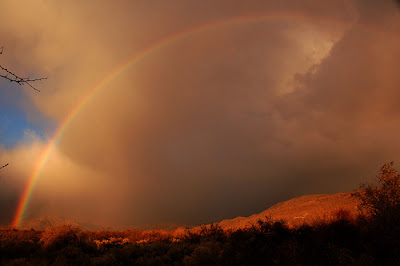 Anza Borrego desert lands, which the Nature Conservancy has helped to protect. (Photo by Bill Gracey, and used under a Creative Commons license.)
If you look at the right-hand column of The Clutter Museum site, you'll see a nifty new charity badge. I'm raising money for the Nature Conservancy as part of America's Giving Challenge. My goal is to raise $500 by January 31, when the challenge ends. Would you like to join me in supporting The Nature Conservancy? It's my favorite environmental organization--it does amazing work.

Haven't heard of The Nature Conservancy? Here's a bit about them from their site:

The Nature Conservancy's mission is to preserve the plants, animals and natural communities that represent the diversity of life on Earth by protecting the lands and waters they need to survive.

We have developed a strategic, science-based planning process, called Conservation by Design, which helps us identify the highest-priority places—landscapes and seascapes that, if conserved, promise to ensure biodiversity over the long term.

In other words, Conservation by Design allows us to achieve meaningful, lasting conservation results.

Worldwide, there will be thousands of these precious places. Taken together, they form something extraordinary: a vision of conservation success and a roadmap for getting there—the Conservation Blueprint. Simply put, by protecting and managing these Last Great Places over the long term, we can secure the future of the natural world.

Here's an image from one of the Nature Conservancy's success stories, Santa Cruz Island off the coast of California: 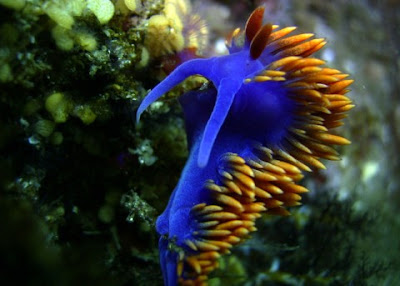 (Spanish shawl photo by Ed Bierman, used under a Creative Commons license.)
Changes in the environment are particularly grim in places we tend to overlook in favor of more celebrated or dramatic landscapes:

Are We Losing Our Lands?
The world is losing key terrestrial habitats, but not the ones you might think. In tropical rain forests, for example, land conversion exceeds habitat protection by a ratio of 2 to 1. We have protected only one acre of land for every two we have lost. That's worrisome.

But in Mediterranean habitats — dry scrublands such as those found around the Mediterranean Sea, along the central and southern coasts of California, and around the tip of South Africa — the disparity is 8 to 1. We have protected only one acre of land for every eight we have lost.

And in temperate grasslands — places like the Great Plains of the United States and the Argentine pampas — we have protected only one acre for every 10 we've lost. Half of such crisis ecoregions — those habitats classified as critically endangered, endangered and vulnerable — receive little or no conservation attention.

Are We Losing Our Waters?
The world's underwater habitats are suffering astonishing losses. Although scientists can't say precisely what percentage of each freshwater and marine habitat has been converted, the overall trends are unmistakable.

As we all know, things are looking grim for the global environment, and The Nature Conservancy is at the forefront of trying to preserve and remediate key habitats. I urge you to give what you can. (Hey, it's tax-deductible, at least in the U.S.) 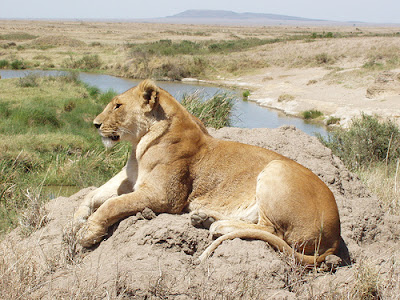 Lioness in the Serengeti , which the Nature Conservancy is helping to conserve. (Photo by James Farris, and used under a Creative Commons license.)

I very much appreciate your assistance in reaching this goal. Simply click "donate" in the charity badge in the right-hand column, which will take you to the Network for Good site to process your donation via credit card or PayPal.

Labels: In touch with my inner hippie, What passes for science around here