A snippet of scorn

As I'm writing and endlessly revising my job talk for this coming week, I've come across some gems from the archives that I know some of my women scientist readers in particular will enjoy. I may share others, but this anecdote is particularly galling to me right now.

In part of my talk I'll examine ranch owner and businesswoman Susanna Bixby Bryant, who founded the Rancho Santa Ana Botanic Garden on part of her ranch property between Los Angeles and Riverside. Bryant wanted to create an arboretum of native Californian flora, and she wanted it to be both comprehensible to the public and useful to scientists. California's botanists were thrilled to have a wealthy landowner demonstrate such support for a botanical project, but some were not so enthusiastic about letting the public tramp around the garden.

How bad was their scorn? Pretty bad. Willis Linn Jepson--you may know him from the Jepson Manual if you've ever botanized in the American west--had this to say in a 1929 letter when he learned that Bryant planned to be director of the garden she founded, provided land for, and hired and paid the staff of:

We have then, in that case, a problem presented which has many difficult aspects. You have not only had no training in the scientific field of botany, but the professional ethics and canons governing intercourse among botanists, a code several thousand years old, is a closed book to you. When you stepped from the field of business and society, where you are quite at home, into the field of Botany you were delighted to find certain privileges awaiting you (privileges quite foreign to the ranch or office) but you do not realize that with those privileges go heavy obligations. Frequently you do things in the name of Botany from which you would naturally refrain in the world of business.*

I couldn't find an image of an older, wiser Bryant glaring at Jepson, so the following will have to suffice as my interpretation of her likely response. 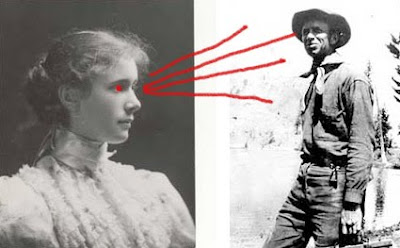 Bastard indeed. And what courage, will and vision she must have possessed (I'm sure her position of privilege helped, too).

Now you've got me wanting to read more--finish the damn book, will ya? And in the meantime, give us more!