1. Lucas will be a year old on September 5. How the hell did that happen?

2. Lucas is still nowhere near sleeping through the night, despite #1, above. How the hell did that happen?

3. The best sleep Mr. Trillwing and I have had since Luke's birth: two nights in Tahoe, bankrolled by my parents, who shared a townhouse with us. They took Lucas into their room on BOTH NIGHTS so that we could get some much-needed, uninterrupted sleep. It was glorious.

Here are the saintly grandparents with Lucas on the shore of Lake Tahoe. 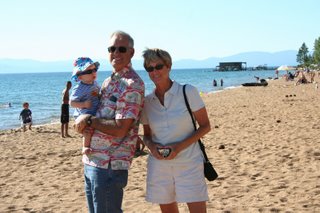 4. This month Luke learned how to sit down from a standing position. He's still not putting much effort into learning to stand without holding on to something.

5. On last Thursday evening's stroll, Luke blurted out his first noun--"the dog." So thorough of him to use the definite article, eh? It came about because we're always referring to The Liability as "the dog." And so "deh dahgh" is how he knows all canines. I was impressed that he recognized two dachshunds as the same species as The Liability, who tips the scales at 50 pounds.

He used the phrase repeatedly throughout the walk to refer to all kinds of dogs. He did not, to my great surprise, use it to refer to the chickens we sat and watched for half an hour. I guess he understands there are at least two kinds of animals in the world. (Have I ever mentioned that one of the local chickens is named "Fabio"? Really, I must get a photo. He's fabulous.)

Beyond The Liability, the animal that has most fascinated Lucas thus far? It's a tie between chickens and sheep, I think. That's what happens when you live in an agricultural county. No zebras or lemurs for us!

6. Lucas has decided he's just not that into baby food, and thus he has moved into kiddie menus, as Mr. Trillwing and I usually order stuff that's just too unhealthy for baby consumption. (Yay us.) Entrees so far: grilled cheese sandwich and chicken soft taco. Boy, was the latter a pulverized mess by the time he was through with it.

8. Attempts to explain to Lucas that I can't finish my dissertation on the couch, especially if he's crawling into my lap: too many to count. Days until diss is due: ten.
Posted by Leslie M-B at 10:48 PM

It sounds like you are having fun with your little one! I don't how you feel about this book, but it really helped us when our daughter was a baby (we had the old edition). I laughed about your couch comment, because I wrote a lot of my dissertation sitting sideways on the couch with my laptop on the couch in front of me (my daughter was born 8 days after my proposal defense and was 2 yrs 8 mos when I finished). I don't think that set-up did wonders for my back or posture, but at least I finished! Good luck- it sounds like you have things shaping up nicely!