"Middle landscape" has been used in many forms--for example, to refer to suburbs as a midpoint between urban and rural living, but most famously, in my field at least, in reference to the pastoral farmland favored by Thomas Jefferson as the place where American character would be forged. It was in the transformation of the land from "wild" frontier to farm that American folk culture was to be cultivated. If frontier settlers were barbaric and urban denizens were genteel to the point of corruption or foppishness, then the middle landscape was the place where real Americans lived. The suburbs can also serve as a middle landscape politically, buffering as they do "blue" urban areas from "red" rural lands.

I live in two versions of the literal middle landscape: in a suburban tract from the 1970s as well as a few blocks from some of the richest farm soil in the world. The result is a suburban landscape where in addition to the usual crows and pigeons, you may see wild turkeys and barn owls, magpies and scrub jays. Walking to the bus once, I saw a quail on a neighbor's roof, just above the native poppies of the home next door. Increasingly, suburbanites in my neck of the woods are replacing groomed green lawns with xeriscaping and/or native plants, and they're cultivating their backyards with fruit trees, tomatoes, peppers, and other vegetables. The local paper just offered free giant pumpkin seeds to anyone who boasts the 800 square feet needed by a single vine. To date, they've had 500 requests for the seeds.

We're seeing here that suburbanites--renters and owners alike--with leisure time and a little extra cash for gardening tools and supplies are trying to green the suburbs. We buy organic compost at the local Ace hardware. We acquire organic tomato plants and herbs at the farmer's market. And we mulch and water and generally nurture our plants until we harvest that one prize tomato or the bumper crop of zucchini--or, apparently, a 300-pound pumpkin.

A neighbor of mine runs a biodiesel fueling station from his garage. It appears there's a co-op of people who purchase the biodiesel in bulk and then divide it among themselves. The community half a block from mine has solar panels on just about every rooftop, as well as communal gardens, orchards, and vineyards. And people in my town bicycle a lot. We're the only city in America to be awarded platinum status by the folks who keep track of community bicycling.

My point is that, if you have the resources, it's getting easier to be green. Whether that means growing your own food, buying organic, buying local food, driving less, or bicycling more. And I'm trying, really trying, to live greener. I use fewer cleaning chemicals in the house and spray pesticides only when the roaches and ants are literally at my door. 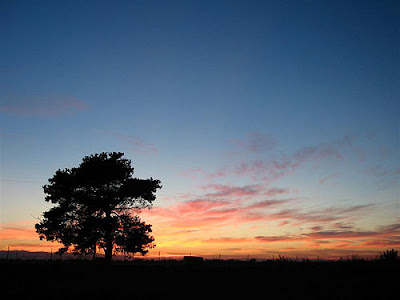 (photo by Yorkie, used under a Creative Commons license)
My metaphorical middle landscapes

I inhabit as well, though, several metaphorical middle landscapes. Consider my vocational and intellectual landscapes. Ask any Ph.D. who works in an academically-oriented staff job (e.g. a faculty technology pedagogy specialist like me) if she fits in with either staff or faculty. I don't. I hide my Ph.D. from the staff and trot it out for the faculty so that I can have street cred with both groups. I'm in the middle ground shared, at my institution, by the such groups as the teaching resources center professional staff, the career center staff, instructional coordinators, and others who hold Ph.D.s but don't teach or publish a lot of research. It's a strange landscape, one that we have to forge anew each day as we negotiate the assumptions of both faculty and staff about who we are and what we do. There's a notable look of relief, for example, when I mention during my workshops (as I usually try to do in a kind of casual way), that I've taught at my institution and have a Ph.D. I'm not, thank god, I can see the faculty thinking, just another trainer forcing them to use the latest software mandated by the university for turning in their grades. By the same token, I need to be able to chat with the staff in my office about their donkeys (there are at least three people in my small building who own donkeys), their Weight Watchers weigh-ins, their stomach stapling surgeries, and much-missed 1980s television dramas. And I like to negotiate this territory, even though it can be a challenge.

It's that old thing Jesus said about walking a couple miles in someone else's shoes. Nobody else's shoes fit me, however. So instead I'm walking, back and forth every day, through this landscape inhabited by people like me, the academically resilient, the scholarly damned.

And so what do I do? How do I keep the alive the life of the mind without tossing my lot entirely in with the faculty? I read a lot. I write. But not as much as the faculty and more, it seems, than the average staff member. It's hardest to keep up (as you may have noticed from my light posting) with the writing, whether it be informally on this blog or more formally with my ongoing (albeit intermittent) research. Throw in motherhood, and it seems any hope of being productive goes into the compost pile.

My solution has been to think green in my intellectual life as well as my physical one. I try to do those things that keep me healthy, that require or allow me to live thoughtfully and conscientiously. I went into these new intellectual woods to live deliberately--only they aren't woods at all. I'm surprised to find this landscape I'm crossing is rich, loamy soil I've been developing during my entire life. Mix together artistic endeavor, intellectual accomplishment, an urban youth, naturalist tendencies, motherhood, marriage, and the entire history of this land--this California--and you get some fertile ground indeed, a pastoral landscape where I'm continuing to forge my own character as I head, next week, into my thirty-second year.
Posted by Leslie M-B at 9:36 PM

Labels: In touch with my inner hippie, Tall tales and true

You wrote: It's that old thing Jesus said about walking a couple miles in someone else's shoes.

I hate to quibble, but it was Elvis who said that. (I'm still looking for a Rush lyric along the same lines for you.)

Also, it makes me all nostalgic for your town. You do have the best Ace Hardware in the history of the world.

Very nice! This newly exposed hippy-ish side is interesting to see.

I have to agree that finding one's intellectualy niche in the post-academic world can be tricky.

Gorgeous and brilliant, as always.

I'm also reminded of something that Stylegeek said about the state of being a PhD candidate (especially in the later, much-teaching years) as being a bizarre middle ground between student and faculty. Someone on campus asked a friend and her whether they were students or staff, and she said "both" while her friend said "neither."