Because I don't already have enough to do, I'm collaborating with a friend of mine on a new venture, Green West Magazine. There's not much content up on the site at the moment, but I encourage you to check it out because I spent many, many hours developing some mad CSS skillz in order to build the site. (It's best viewed in Firefox, by the way.) 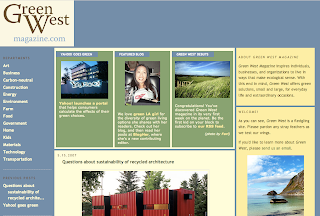 We're not exactly sure where the site will go, but in the best case scenario, we'll build up a nice readership over the next year or so and maybe make enough ad revenue to buy ourselves a few books. :)
Posted by Leslie M-B at 11:35 PM

Good luck! And look at you getting the CSS skillz. Maybe you can help me later. (Of course, I find that it helps to have some sense of design -- which you clearly have -- before leaning on CSS.)

Best of luck. A great idea. I lived in Colorado for years until moving east - in very green Boulder county. Boulderites will appreciate your venture.

Yes, good luck on your venture.

And isn't every site best viewed in Firefox? ;)