Nostalgia for times gone by, even craptastic ones

In the past week or so, some of the academic technology bloggers I read attended Faculty Academy at the University of Mary Washington. UMW, or as I know it, Mary Washington College, was where I spent my first semester of college. And since I recently (quietly) marked the 10th anniversary of my graduation from college, I've been feeling kind of sentimental about my college years. 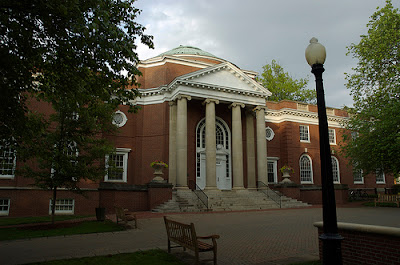 (photo by Cyprien Lomas, used under a Creative Commons license)
My time at Mary Washington College was not a happy one. Let me count the reasons:
At another recent conference, I met someone who had attended Mary Washington at the same time I had and who had stuck around as a staff member. She said the atmosphere on campus had improved a lot and that my experience as a student had not been her experience. Of course, a student from Virginia (which I'm assuming she was, since most students there were) is going to have a different experience than a student from Southern California. I dearly hope that the smothering religiosity (prayers at public gatherings) and unspoken (by whites) black-white racial tension has resolved itself in the intervening 14 years.

My time at Mary Washington was marked, fortunately, by my discovery of poetry, and particularly American poetry. I read a lot of of the Southern poets, wrote a paper on Allen Tate's Ode to the Confederate Dead. Despite the poetry course, the curriculum that semester failed to challenge me, and so I spent a lot of my time wandering Fredericksburg, meditating on the worn stone slave auction block on a street corner, the Civil War and Revolutionary-era cemeteries, the Sunken Road that played such a pivotal role in the first battle of Fredericksburg. I rode my bike along the old VEPCO canals, trying to avoid what my geology professor dubbed the "sociopaths" who hung out under the overpasses. Once my roommate and I were pursued, on bike, by one such sociopath, almost right to the door of the college police station. (To this day, I have far more fear of strange white men than of young men of color. I'll cross the street to avoid a redneck-looking fellow, but not someone who appears to be a gang member.) It was a dark time in my life, and I wrote a lot of poetry, which was good for me.

And despite the darkness, I still feel a strange nostalgia for that time. I'm realizing it has less to do with Mary Washington and more to do with youthful energy (physical and intellectual) and the vast amounts of time--time alone and unsupervised by anyone--that I now largely lack in my life because of my responsibilities as a mother, wife, and employee.

Don't get me wrong--I love Mr. Trillwing and Lucas and wouldn't trade them for a lifetime of intellectual exploration, creative production, and personal reflection--but I miss that vigor, overshadowed though it was by various darknesses. And my post from yesterday on middle landscapes is a reflection of that, of finding a balance in my life so that I don't totally subsume my solitary, creative and intellectual time into my new life as a mother and full-time worker.
Posted by Leslie M-B at 11:29 PM

Research universities do it better !!

Well , colleges are collegial too...

as a more recent grad, I'm glad things have sure changed at Mary Washington. Of course it's not without problems, but I had a wonderful experience there!

WTF was I thinking, attending college in the South?

I'm going to call you on this one. I'm sure you're right that there were all kinds of unacknowledged or poorly acknowledged racial tensions in your time at Mary Washington, but I think that assuming this is endemic specifically to the South is painting with far too broad a brush.

I have taught college students in a variety of contexts -- urban, rural, southern, midwestern, and yes, even southern Californian, schools -- and in my experience many of them, from all regions, were "white people who had clearly never thought at all about race." And facilitating that thinking is part of the job of college professors, both in the South and in the rest of the country. Your professors at Mary Washington may have fallen down on the job, but such is not the case at all Southern schools. And probably only some of your professors were Southerners anyway, given the realities of the academic job market.

I am concerned that demonizing the South as the locus of race problems in the United States greatly impedes anti-racism work in other parts of the country. Plus, it's just sloppy and uncritical thinking!