We are not curators

There's been a ton of talk over the past year about how participating in social media—whether through blogging, social bookmarking, Twitter, Flickr, or whatever—can be a form of curatorial practice.

And I totally get the appeal of that particular metaphor. In fact, I understand that some people mean to use it in a very literal way, in the sense that they see themselves as imposing a welcome order or useful narrative on a very unwieldy collection of internet artifacts. I've seen some people I think are absolutely brilliant using the term this way.

Those who know me well know I don't roll out my Ph.D. lightly. But as an (OK, adjunct) professor of museum studies and soon-to-be assistant professor of public history, I have to call bullshit on this one. As a lover of metaphor and as a poet who embraces all the possibilities of metaphor, I completely expect commenters to tell me to loosen up in this case. In fact, I suspect I'll come across as a snob. But really, this distinction—what is curating, what very much isn't—matters tremendously.

Educators with some facility in social media have become particularly fond of the term. But education isn't curating. Curating isn't education. In fact, in many museums, curators and educators are, alas, at odds with one another. Traditionally, curators have developed a depth of expertise in a content area over years of study, while educators tend—and yes, I know I'm generalizing here—to be younger folks with less education and experience. Education positions have a ton of turnover, a ton of burnout; curatorial positions come with more prestige and a sense of ownership of a position, sort of like tenure. Curators have at least a master's degree and frequently a Ph.D. Educators have undergraduate degrees and increasingly, in this era of incredible competition for jobs, master's degrees.

I don't mean to imply that curators are above the fray, that they hold themselves at arm's length from education. But their function is different. Curation is not a process of choosing the best resources to help other people learn. It's much, much more, and to suggest that social bookmarking, sharing links via Twitter, or using an internet platform's algorithm to help you determine which songs belong on your internet radio station is curation is ridiculous. Differentiating among things you like and dislike, or resources that you think are good or bad, and then sharing those opinions with people as a collection of internet or educational resources, is not curation.

When people talk about "curating" via social media, they're really talking about filtering, and curators do so much more than filter. You can't, I'm afraid to inform Robert Scoble, just "click to curate." In fact, the absence of talented curators makes a given educational context degenerate, in newcurator's most excellent formulation, to reality television.

Educators also do more than filter. They translate the curator's research and expertise into small bites digestible by the general public or schoolchildren. This is a talent unto itself, and—speaking as a former museum educator and exhibition developer—it's not easy to develop because informal learning diverges so spectacularly from what we're all taught is supposed to happen in formal educational settings.

The conflation of a combination of sharing, digital resource connoisseurship, and online teaching and learning with a form of curation not only devalues the actual practice of curation—and by extension the time, effort, and passion it takes to develop sufficient expertise to become a curator—but also obscures the skills we hone as we navigate sharing on the social web.

We need a new term for folks who are developing (or who have already developed) the depth of expertise that marks curatorial work, but who also practice the distinctive forms of teaching and learning engendered by the social web. It's not exactly edupunk, and it's not museopunk.

In my mind, the people—and particularly academics—who occupy this space practice Keats's "negative capability": they are "capable of being in uncertainties, Mysteries, doubts without any irritable reaching after fact & reason." By this I mean they get the tension—apparent to anyone who has planned a college course or an exhibition—between helping students or visitors develop content expertise and giving them opportunities to think critically and creatively. Doing both of these things simultaneously—cultivating expertise and promoting real intellectual development and discernment—is incredibly difficult to do from a lectern or via exhibition label. The social web, like a provocatively interactive museum exhibition, offers new possibilities for this kind of participation in, and service to, the world. 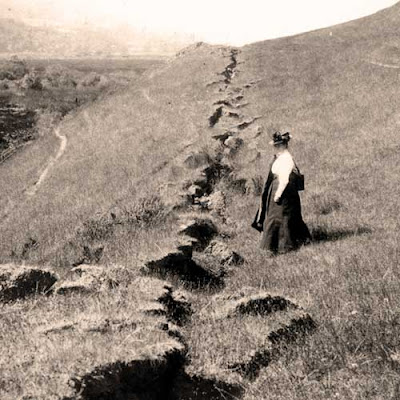 California Academy of Sciences botanical curator Alice Eastwood standing on the scarp of the San Andreas Fault, 1906. Eastwood was both a curator and an educator.
What we call that exciting—and dare I say disruptive?— role is open to discussion and debate. Kindly leave your witty neologisms in the comments.

Update: Just saw this article on the new curators in the New York Times, which in some ways undermines my argument and in other ways reinforces that curating is its own special skill set. An excerpt:

It is also a group plugged in to all areas of museum life. They don’t simply organize exhibitions, they also have a hand in fund-raising and public relations, catalog production and installation. “The old-fashioned notion of a curator was that of a connoisseur who made discoveries and attributions,” said Scott Rothkopf, 33, who is the latest full-time curator to join the Whitney Museum of American Art’s team. “A lot of that work has already been done. The younger generation is trained to think differently, to think more about ideas.”

Wow, zing (is that a witty neologism?)

Seriously, I like the push back. So many of us, especially namely me, maybe don't have the full grasp of what curatorship is but that added NYTimes article is a great help.

So now that you've established what a curator is not, let's hear more on what it is, or better, what are the things people have been lazily slapping the label in can learn from the craft?

This might be kind of off base but, I've noticed a trend that various fields are merging and borrowing terms, concepts and skill sets from one another.

Take the field of "information science". Information schools are teaching courses on how to use social media (marketing?) and how to use Photoshop (graphic design, art, journalism?)

Thank you for sharing this. When you mentioned 'click to curate' I thought of those who think they archive (because they "saved it to a folder." Borrowing terminology doesn't always work as you have shared.

Substitute "publish" for "curate," and this is similar to my argument about publishers. You also can't simply "click to publish," but I know the whole blogosphere would disagree with that. Although social media blur the lines in both these fields, specific needs and talents remain necessary. In any case, I'm glad to see you stepping up for the distinctive profession of curation.

Thank you for an excellent post, Leslie. We actually curated your piece, today!

I think your push-back is spot-on and reflective of the response we all usually express when previously settled structures undergo some type of radical change. However, this cross-pollination of ideas from information technology into higher education and museum science was bound to happen. The question was not whether it would happen, but when.

This is an exciting time which, who knows, may end very soon, but let's bring the curators to the spotlight! Social Media is moving quickly to learn and cross-pollinate ideas, further.

Well, color me a bit chagrined. After doing a presentation last week in which I relied pretty heavily on the curation metaphor, I'm pretty sure that had you been in the audience you would have winced. :-)

Thanks for keeping us honest in the use of our language. As others have asked, I'd like to have a deeper conversation about what curation is. (And, Teddy, about what publishing is). I recognize that if we use these metaphors as a means to evoke new kinds of dialogs and experiences in the classroom we may miss the mark in terms of the professional standard. But I'd like to think that the more vigorously we understand and consider what constitutes professional curation and publishing, the more likely we are to develop richer and more meaningful experiences.

In education, I think we use use language from other domains all the time as a way to make experiences more meaningful. To be sure, in the laboratory of the classroom, we're not going to be practicing these disciplines as much as we are going to be modeling and "performing" some of their associated acts. But I do think there is value in that performance and modeling -- and I definitely want those with domain-expertise (like you and Teddy) to be holding us as true as possible to our metaphors.

Leslie: My apologies for this being pretty far off topic. I am working on my thesis on the sustainable museum, and will be quoting from your 2009 blog titled "What can museums learn from the decline of American newspapers." Would it be possible to speak with you about that article?