More scenes from our new life

The past two weeks represent the first time in years that Fang and I have spent so much unbroken time with the boy, as his next preschool term doesn't start for another couple of weeks. We've both noted how much we've learned about Lucas, and we're seeing huge leaps forward in his development, and particularly in his imaginative play, creativity, and helpfulness.

One example: Lucas has always wanted me to help him make little sculptures out of pipe cleaners. Last week, however, he took matters entirely into his own hands, shaping and reshaping an elaborate sculpture so that it was first a hat for him, then for Fang, and then something to go over his shoe and trail behind it: 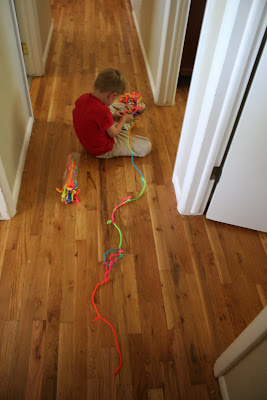 I've begun to worry that the boy is gifted in a right-brained way. I worry that he'll test just shy of gifted and won't get the challenge he needs in a mainstream class. I'd like him to be bright, but solidly mainstream, or clearly gifted, so that it's clear what kind of educational path we should set him on. His favorite things right now are stickers, tools, drawing, writing the letters of his name, and being read to--especially poems by Shel Silverstein. He's just starting to get the jokes in them, to pick up on their various ironies, which is a lot of fun.

The dog is also growing--and growing on us. Jake is alternately zen and puppy-crazy-dumb, and he's learning to negotiate the house's many hardwood floors. He often sounds like he's tap dancing. Here's a photo I took of him yesterday; he's about six months old now, and really turning into a lovely dog. 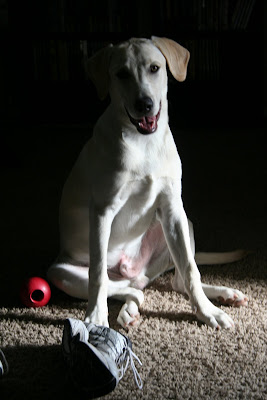 If you need some scale, that's a large Kong dog toy at the left of the picture, and a men's size 13 shoe in the foreground. He's a big pup!
Posted by Leslie M-B at 10:41 AM

And, shockingly, the shoe is still in one piece! Your pup really IS growing up!

puppies that are alternately zen and crazy-puppy are really great. *Eventually* they'll grow out of the hyper crazies, and you'll be left with zen dog. I love zen dog.