I am the love child of Aldous Huxley and Penelope Cruz... and Mr. Trillwing is a Black Journalist

So I finally tripped on over to the celebrity face recognition thingy that everyone's trying at MyHeritage.com. I uploaded a few photos, and the results varied wildly. Here are two sets of them:

Lucas (baby trillwing) is, I guess, black--Arthur Ashe, Tiger Woods, Wilma Rudolph, and Janet Jackson top his MyHeritage.com lists. Good to know he also has a little Oscar Wilde in him. Not so thrilled with the Slobodan Milosevic or Matt LeBlanc, both of whom, last time I checked, are very Not Black.

This reminds me that Mr. Trillwing spent some time as a black journalist: 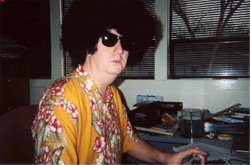 When we moved to our current burb, Mr. Trillwing made some cold calls and landed a couple interviews with newspaper companies in the area. But because Pete is Not an Academic, he didn't obsess over researching such details as what kind of papers these companies produced. So he reached the location of the first interview (scenically located under not one, but two freeway overpasses), and it was only as he climbed out of the car that he saw the van art trumpeting the weekly as the region's "Best Black Newspaper." The result: for some months Mr. Trillwing was the paper's token honky--the only other white guy in the office being a diabetic, cracker-scarfing senior citizen who clung desperately to the celebrated but dying art of paste-up.

Mr. Trillwing has since moved on to other pastures, but retains a love for black journalism. He's in charge--yes, from a spare bedroom in our apartment here in Whiteyville--of the production (pulling copy, selecting photos, designing ads, laying out the paper, and publishing a companion website) of a newspaper that serves Major Black Community. He also does a lot of design work for a local, black-owned real estate company. This gig resulted, in a surreal twist of fate, with Midwestern, winter-pasty, Dockers-wearing Pete receiving an "Image Award" from said company in front of a black-tie booze cruise packed with extremely well-dressed people of color. (Earlier in the evening, as we were preparing for the event, Mr. Trillwing had asked, "Do you think I can wear jeans?" The khakis and a button-down shirt (no tie) were our compromise.) Pete was delighted with the recognition; I was delighted by the sheer absurdity of anyone in my family being appreciated for their aesthetic sensibilities.
Posted by Leslie M-B at 8:05 PM