Tom Waits? Is that you? 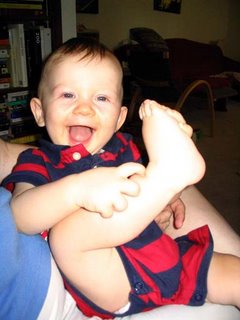 While I tried letting Lucas cry it out a few times, it only ever worked that once, when he crashed in just under half an hour. The other times, either he was too persistent and too loud or it was too late in the evening for us to allow him to cry it out, as we live in an apartment and there are people on two sides and above and below us. So I've pretty much given up on our half-assed Ferberizing.

Mr. Trillwing, unbeknownst to me, had not. When I'm teaching three times a week--conveniently during Luke's afternoon naptime--Mr. Trillwing has a few times tried to let the little guy cry himself to sleep once he appears to be drowsy.

Last week it apparently got a little bit out of hand. Mr. Trillwing and Lucas had a stalemate for an hour or more, and Luke still didn't fall asleep.

The problem? Now Lucas is more than a little bit hoarse. I pointed this out to Mr. T, and my husband actually smiled.

"He sounds like a miniature Tom Waits," he said.

". . .Like he’s been gargling glass shards and smoking three packs a day since the Eisenhower administration," Mr. Trillwing rhapsodized.

"Get him singing lessons?" he asked hopefully.

Stay tuned for another episode of Will Dr. Wonderful call CPS?"
Posted by Leslie M-B at 9:23 AM

Better get Lucas some smoking lessons while yer at it, just to make sure it sticks.