Not your typical toddler 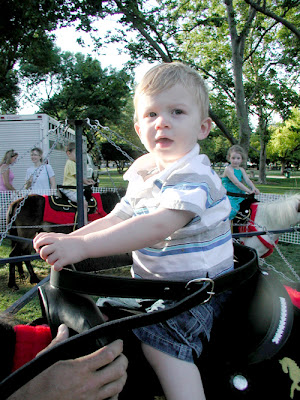 Have I mentioned Lucas is not a typical toddler? I mean, he has meltdowns occasionally, but they pass very quickly, particularly if there's a sippy cup of milk nearby. I see other toddlers throwing these monster tantrums out in public and I just turn to Luke and say, "Don't get any ideas, Little Man." And so far he hasn't.

This afternoon we went to a potluck at the park with some other kids born in August and September 2005. While the other kids ran around like, well, toddlers at the park, Lucas was tracing patterns in a thin layer of sand on a slab of concrete. It was like his own little Zen garden. And then we put him on one of those metal carousel thingies that you don't see at parks too much anymore but that were all over the place when I was a kid in the late 70s and early 80s. The other toddlers were stomping and shrieking and falling to the floor, but Lucas took the role of ethnographer, sort of participating in the ride, but more observing than participating, standing quietly without really standing apart from all the rest.

Of course, such behavior is a wee bit worrisome. Are we not socializing him enough?

So tonight I took it upon myself to teach him how to jump out at people and say "Boo!" Because, like spinning around until you get dizzy and fall to the ground, it's one of those essential life skills.
Posted by Leslie M-B at 9:45 PM

okay, my friend is extremely social and her kids are around other kids all the time and it still took her son until he was 3.5 to really start showing his social side. he always preferred off by himself or just watching the other kids. now he interacts a bit more, though he's still reserved. my point being, your son sounds perfectly normal to me, though maybe a bit more thoughtful and considered than the typical toddler.

I agree. The Toddler didn't really show any interest in other kids until very recently. Maybe in the last two or three months. (He was born Jan. of 2005.)

He has recently, again last two months or so, begun to throw tantrums in public. I think that they are better than the ones most parents let their kids throw in public (mainly because we remove him from public when it happens) but it is a recent development.

We're gonna have to learn "BOO!"

And dang but ain't he cute, too.