Of the countless topics I don't address in this space, there's one that should count more than others: the matter of the dog. After all, in July we will have had this dog for two years, and yet he hardly appears in these bloggy pages at all. 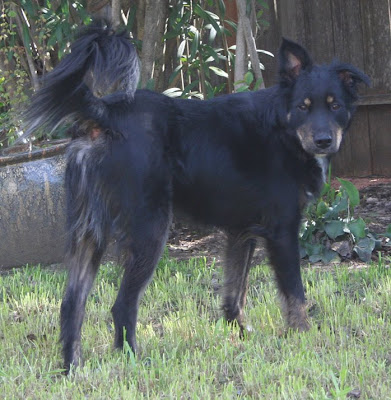 There's a big reason for that: he's a biter, or to be fair, more regularly an attempted biter. We've kept him in check, thank god, and we've tried our damndest to break him of this habit he brought with him from his former life. But I didn't want to write about it here because (a) it's embarrassing and (b) I didn't want to put anything in writing, lest he actually bite someone--I didn't want evidence that I had prior knowledge of his aggressive tendencies.

We've had some close calls. Because he looks so damn friendly, people try to pet him when we're out walking, and he inevitably lunges at them. On walks, I carry a muzzle in my back pocket for that exact reason. We worked for a while with a trainer whose advice helped quite a bit, but during obedience class even she had difficulty controlling him, once mentioning that he seemed to be "on crack" and telling us to drug him with Benadryl before training sessions. (We never did drug him, preferring to try to wear him out first.) When we have friends over, we have to crate Obi and put him in a room away from the action because he's both anxious and territorial.

Obi has come a long way, but not far enough. This past week Obi crossed a big, fat line: he bit my husband. You can read a first-person account at Fang's blog.

Accordingly, we're seeking a new home for Obi, one with someone who has more time and energy to devote to this crazy high-energy and clearly troubled dog--and more importantly, one without kids around. Preferably on a farm. Upstate. With rabbits. And no--I don't mean for that to be a euphemism for euthanasia. I looked up information about dog bites, and it appears dogs that produce the kind of bite Obi gave Fang can usually be rehabilitated. I really think this dog, who is bright but with a couple screws loose from being passed around (we are his third owners that we know of), would with some rigorous training make an excellent working dog. He's really well-behaved when I walk him off-leash in the fields and even is a gentleman when I've been brave enough to take him to the dog park.

But in the house? In the yard? On the leash? A totally different dog. Almost feral.

The good news is when we adopted him from the SPCA, the organization said we could return the dog at any time. I've e-mailed the folks there and asked them to contact me to discuss Obi's future. I want to be absolutely sure he doesn't go to a home with kids, and I may even mail a registered, notarized letter to that effect when we hand him back to the SPCA folks.

I feel terribly guilty and depressed, because in my experience with pets, adoption is a lifelong commitment, and I feel as if we've failed this dog. And despite his quirks and his destructiveness and how much he frustrates me, I do love the beast.

If we didn't have a four-year-0ld kid, we'd redouble our efforts, as after all we are dog people: We could do more obedience classes. Get him on calming drugs, maybe some Eastern medicine from our fabulous holistic veterinarian. Have more one-on-one sessions with a trainer. Exercise him for hours each day so that he's completely worn out when he's around the house and other people. But at this point in our lives, we can't have an unpredictable dog in the house.

It's absolutely breaking my heart.
Posted by Leslie M-B at 9:34 PM

You did the right thing.

We have fostered over 25 dogs and had one just like Obi. He was adorable, looked totally cuddly, but something was clearly not right with him. We called him Damon (continuing our trend to name dogs after Red Sox players). Damon must have been abused in a previous life because it was clear he was TRYING to be good but just couldn't trust us, trust others, trust anyone.

At that time I two younger kids and as much as they loved the dog, my husband and I could not live with the fear of them being bitten. We took him back to the woman who had arranged for us to foster him and she tried as well to remediate him. No luck. He had to be put down not because he was a bad dog, but because someone, at sometime, had done something bad to him and it could not be corrected.

Sadly, you can't fix Obi. But what you can do is take in another doggy soon and show yourselves that it need not always be this hard, this worrisome. Make it so there is one less abused, scared, fearful, doggy out there.

Hopefully Obi will find a good home, but you did all you could and gave it your best shot. But your family's safety always comes first.

The hardest thing and the right thing truly are the same.

I think you are doing the right thing too... for the sake of your child and sanity.

When we were children, my dad and stepmom had a chocolate lab that was a nipper. For a long time we weren't allowed in the backyard alone with him, but then he seemed to be get better. My brother was in the backyard playing one Sunday afternoon and the boy that lived next door climbed the fence to play with him. The neighbor boy picked up a stick to swing at my brother and for whatever reason, when John blocked the stick, Hershey lunged at John's throat. My dad had to beat the dog off of him. The cops made my parents put the dog to sleep and my brother still has scars on his neck from the puncture wounds.

I'm sure Obi is a wonderful animal but you never know what might set him over the edge. My dad was very shaken to think that they might not have heard the screaming from the backyard and been able to save my brother from the attack.

Nippers usually make fantastic herding dogs. Maybe the rescue can find a big farm for him to live on.

I am so sorry to hear about Obi. I hope that you find a wonderful, calm dog to bring into your family.

Oh, that's a real bummer. We're having minor biting issues here ourselves, but of course, Gracie is still a puppy. Also, she hasn't really been properly walked since Friday because it's been raining pretty hard most of the time. Today, she gets a long walk and I hope that helps.

There was a cocker spaniel at the SPCA when we were there with similar problems to Obi's. She couldn't be in a home with kids or cats. You're not far from the Dog Whisperer (Cesar MIllan), btw.

Yes, but Cesar Milan is now his own doggie training empire, alas. His theory though is a good one: YOU need to be the leader of the pack, not the dog.

Your information about Obi in real world surroundings will help the next family or person know what the dog needs to co-exist. And that is really the crux of the matter here: dogs need to coexist with us, and not the other way around.

Our family had to do this with a dog when I was small. Muppet loved everyone in the world except me. I'd be sitting in the living room and he'd come from another room, bite my toes, and walk away. My parents did find a farm family for him and he was much happier. And you'll find a good place of Obi, too.

Oh, this sucks.
I am sorry.

As cliche as it sounds, I feel your pain. The dog icon I use all over the web and my site was the sweetest kind of lab with people-- and a ferocious biter of other small dogs.

I can outline al of the things that wer tried but he kept doing it, and the last dog he attached was a rather special pup. And I hate to say, there in the pet emergency hospital finding out Mickey's teeth somehow missed the pups throat-- that I knew i had to put him down.

That hopefully may not be Obi's end and I understand and have the same hopes you can find that place for him.

But the harsh advice we got is that in all of our love of domesticated pets, dogs are descendants of wild animals that can still retain those tendencies, for what is inexplicable to us, to attack. And for some, it may not be fixable in our sense of fixing.

My heart breaks for you in this situation.