The San Andreas Fault slipped in a big way. 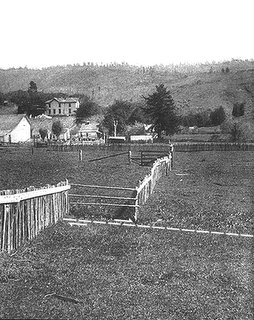 This photo by Grove Karl Gilbert of the USGS illustrates the extent of the displacement caused by the 1906 quake. Pictured is a fence near point Reyes displaced 8.5 feet. In some places the earth moved up to 29 feet. Typical creep along the fault is about 12 mm/year. See a photo of a modern-day fence warped by the fault here.

I had family in "The City" (as folks from my area so snobbishly call it) at the time, but as far as I know only fragments of an oral tradition remain, so I must hunt alongside the rest of you for quality information on the big one of 1906. 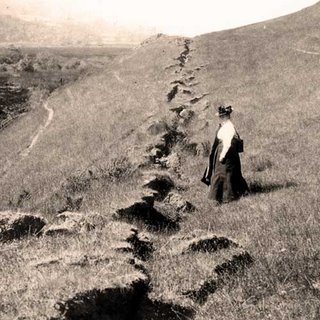 A woman--most likely Alice Eastwood, curator of botany at the California Academy of Sciences--examines a rupture in the earth caused by the 1906 quake. Photo by Grove Karl Gilbert, U.S. Geological Survey. (In a sad twist, Eastwood was engaged to Gilbert when he died 12 years later.)

My favorite story following the quake concerns Alice Eastwood, who has a big presence in my dissertation on women museum scientists. She was an amazing woman with voluminous botanical knowledge and a sharp mind who frequently could identify plants from the tinest scrap of leaf. Although the 47-year-old Eastwood was already gaining the respect of the national and international botanical community based on her talents as a botanist, her reputation was helped considerably by her actions immediately following the big quake. In short: in the long skirts of the time, she scaled the iron railing of the crumbling California Academy of Sciences staircase in order to reach the sixth floor and save the type specimens of the Academy's collections. She spent the next few days shuttling the collections from place to place, always staying in front of the fire, which consumed the Academy building itself shortly after Eastwood escaped with the type specimens. Matthew Bettelheim of Bay Nature retells the story here.

Through the wonders of the Internet, you can watch film footage of the aftermath of the quake here, here, and here.

NPR has some terrific information on the quake, including photos from today of quake sites, here, and oral histories of quake survivors. accompany a story on children's experiences of the temblor. Here's a rundown of the NPR coverage.

Also, did you know that, since the quake sent rats fleeing from buildings, the plague had a resurgence in San Francisco? Way to kick people while they're down, Mother Nature. (The plague had flared up in the city a few years previously. For an interesting account, read Marilyn Chase's The Barbary Plague.)

Here's your reward for sticking with this post until the end: Elizabeth Hickok has rendered the city of San Francisco in Jell-O. Be sure to watch the minute-long video clip of the trembling city.
Posted by Leslie M-B at 10:03 AM

The post was its own reward. But I did enjoy the jello earthquake. Thank you!

OMG! How does she keep the jello from melting or falling apart? Its so wonderful and amazing to be able to see those old films so easily.