I'm having car seat angst. Seriously, this is occupying a major portion of my brain, so I thought I'd dump it here so that I can move on to the dissertation that refuses to write itself. 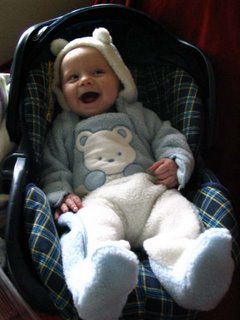 Lucas is now, at just under five months old, too big for his infant car seat. The infant/toddler car seat we bought before he was born (before we realized we wanted a car seat that we could carry him in) is too big to face backward in our generous sedan and still recline at the correct angle. But state law requires him to ride facing backward until he's at least one year old. 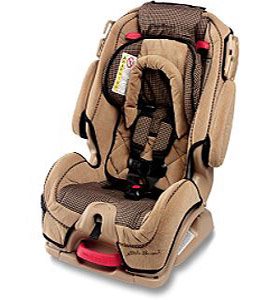 Any tips on car seat installation from those who have been there?

We'll probably have the new seat installed by the same county health folks who installed the first one. Hopefully they'll have more luck than we've had. But my god is this frustrating. . .
Posted by Leslie M-B at 7:52 PM

Try rolling up an old towel under the car seat, as an aid in adjusting it to the proper angle.

Thanks for the tip! We actually tried the towel thing, but the problem right now is that the car seat's back hits the front seats. Both Mr. Trillwing and I are tall, and the only way this car seat will recline at the correct angle is if we scoot both our seats up all the way to the dashboard, which renders the car pretty much useless to us. So aggravating!!!

Stopping by for a visit after your very kind comment on my blog. Pleased to meet you.

OT: I saw your comment over on NK's blog about job prospects. I applied for nonacademic jobs last year; I found that while a PhD can be scary to nonacademic employers, larger organizations are sometimes looking to hire PhDs in order to increase their cache. Do you know of any such places?