(Warning: Mommyblogging about cute infant milestones ahead. Read at risk of rolling your eyes.)

All he wants to do these days is eat, eat, eat. Last night we moved him up to the bigger bottles, which increases by 50% the amount of formula he gets each day, and he's been nursing more enthusiastically, too. We started him on "solid" food this week (organic rice cereal), and at his first feeding he grabbed the spoon and tried to shovel the stuff into his mouth. After five feedings, we're at the point where almost all of the pablum goes down the gullet, and he's leaning forward and grunting for more, more, more!

So we're using this renewed interest in food to our advantage to solve the poop problem (Lucas is, er, anal retentive). We've tried again and again to get him to drink diluted prune juice, but he'll only swallow a few milliliters. However, he's become quite keen on holding his own bottle. So. . . tonight I gave him a bottle that contained 4 oz. of watered-down prune juice and watched with delight as he fought between his desire to feed himself from the bottle and his extreme displeasure with the taste of the juice. And he. drank. the. entire. bottle. W00t! (I can't believe the things that bring me joy these days. . .)

That was course two of a four-part meal; in a single hour, he consumed rice cereal, breast milk, prune juice, and formula. Can you say "growth spurt"?

Last night while I was crafting my posts for BlogHer, Lucas was sitting next to me in his aquarium bouncer (best baby distraction ever). Out of the corner of my eye, I noticed he was squirming a bit, but until I turned to check on him, I had no idea he had done this: 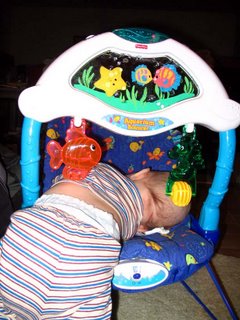 Well, there's another pillar of our childrearing technique that's jumped the shark--following the playgym that recently became The Pitch Pit.

Lucas is also into grabbing at our faces. Today he tried to rake out my eyes. Yesterday Mr. Trillwing was treated to some baby love: 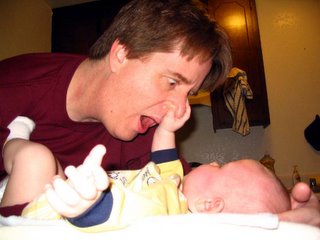 Finally, Mr. Trillwing had a tough time getting work done today because Lucas has returned to his advocacy of attachment parenting and high-touch babyrearing. When I returned home from teaching, I encountered this scene. It says "Daddy's had a rough day" all over it: 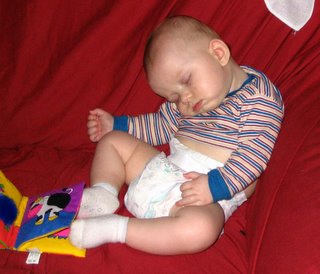