I've always been fascinated by the San Francisco quake of April 18, 1906. I had family survive it--my great-grandmother, who was disabled, was a child at the time, and the inspiration for one line of this poem.

Since the 100th anniversary of the quake is this week, I'm planning to post some stuff about it over the next few days, and I thought I'd share this poem, which I wrote circa 1995. It's in need of some revision, but I'm going to go ahead and post it as-is because I have, like, this other little project I'm working on this month. ;) 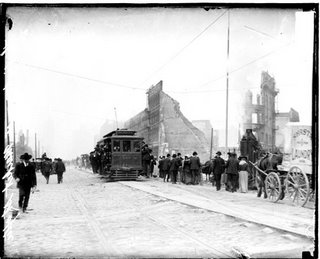 
What Remains
San Francisco, as seen in The Overland Monthly, May 1906

The squeal of horses buckling beneath a rubble rain:
the first smell of burn; the hiss of tugs
pumping Pacific spray to waterfront buildings.
Except for this last, it looks like Richmond
forty years before: the charcoal ruins of wooden buildings,
stone gutted like thought; the bowed steel of tracks;
the officers point or poising, hands
planted on their hips, in small groups.

They destroyed the grand boulevards with dynamite
to chasten fire and pay homage
to fault-riddled earthen gods
Pacific in location only—to appease the saints
Francisco and Andreas.

Where the photos are vague,
someone has penned suggestions: an outline
of a fallen horse, a woman’s skirt,
the haphazard angles of buildings,
the bulge and twist of streetcar rails.

Yet all sources remark a cheeriness in the faces,
a generosity, attempts to continue without houses,
water, transportation: the camps built for those who fought
pneumonia on the first unsheltered nights;
the women building stoves from rubble and brick;
the family at white-clothed table,
on fine chairs, dining in a wasteland.

The fire shepherded the people to Golden Gate Park,
the Presidio, the ferries. Black figures scampered
like rats from house to house, gathering
what they could: tables, dressers, chairs,
the crippled children. Dead horses littered
the narrow, gray, smoke-shrouded streets.
One statue, like the city, balanced on its head.
Posted by Leslie M-B at 7:18 PM

That's beautiful.I love the images in the last stanza.

I've been meaning to do some more reading about that quake--a few months ago I read Laurie King's Locked Rooms, the latest in the Mary Russell series, dealing with Russell's childhood in SF and events around the earthquake. I don't know enough to judge the history as presented in the novel but it definitely made me want to know more.